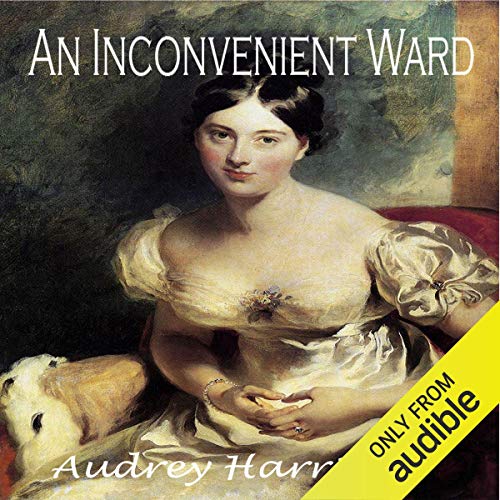 Although this book is part of a trilogy, each book is a stand-alone story in its own right.

Lord Michael Dunham is bored of society, bored of fickle women, but above all that, he is afraid. His father suffered from madness, and Michael is terrified that he will inherit the same affliction. He scrutinizes his every mood swing, his every expression, to see if he can detect any signs that he is developing the symptoms. It blights his life. He has determined that he will never marry, putting a wife through the same that his mother suffered, and he certainly will never have children. The disease will die with him.

Miss Elizabeth Rufford is a young lady who is more comfortable managing an estate as far away from society as she can possibly be. She would rather be planting crops than dancing a quadrille, rather be building walls than playing cards. She did not seek a London season when she came out of the schoolroom and would be happy never to visit the capital.

A line in a will force the two together. Lord Dunham is Elizabeth's guardian, whether she likes it or not, and she really does not like it! Bounding into his life in the most outrageous way possible, Elizabeth makes an impact she never intended to. Michael is drawn to the feisty woman and suddenly finds that it is hard to fight one's demons when Elizabeth Rufford is a part of your life.

Not clean and steamy scene out of character

Would you recommend An Inconvenient Ward to your friends? Why or why not?

I would recommend this for people who like steamy romance novels.

I was disappointed. I purchased this book because the cover and description gave me hope it would be an Austen style love story. It does begin that way but with a slightly more modern heroine. For the first 11 chapters I was expecting a 'proper romance' style novel. The male lead is written to be principled, dutiful and honourable. Someone who would self sacrifice and do right by those he loved and his ward is described numerous times as to naive and innocent so the steamy scene in chapter 12 seemed out of character for both and as though it was put there just to appease readers who like steamy scenes in romance novels.I cannot comment on the rest of the novel because I didn't want to continue the story after that scene. I expected there would be more such scenes to follow and I no longer cared for a character like Lord Dunham who would do as he did to his ward.

Very easy listening by a great narrator and a lovely sweet story. I look forward to the next one!

A good story and even better listening experience

This is a well-told and believable regency story. Elizabeth is a good female character who is engaging and authentic at the same time. Michael can be a little annoying at times but also pretty real. The plot has some twists and a fiendish antagonist but is fast paced and mostly light and funny. The fact that Elizabeth stands out from society (mainly by not wanting to conform to her designated role in society but by doing something she really likes and is good at) is, uncharacteristically for light regency books, met with a strong rejection by society, so this is not a book about how the female character wins everybody with her odd ways and magically becomes the centre of a doting group who initially rejected her. It’s a believable story specifically because all the strictures and limitations of the regency period are in place and Elizabeth and Michael have to find their way and what they want (he is also a bit of an outsider from society) despite these strictures. Even so, it’s still an easy and light read with some genuine and funny characters, leaving a good felling about it.

I was given a copy of the audio book to review and I would recommend it to everyone who enjoys regency novels. The narration is outstanding with an excellent range of voice and tone, greatly improving the listener experience. Elizabeth Klett has a way to bring the regency period to life in her narrations, leaving the listener even more pleased with a book.

Elizabeth Klett, the narrator, was superb as usual. Author put together an interesting if somewhat farfetched story.

Recommended for lovers of Regency romance

I enjoyed the story overall, and Elizabeth Klett's narration is always a joy to listen to. In An Inconvenient Ward there was some treachery involved and a secret that could have a profound impact on the main characters. It was nice to see how it all played out in the end. I was pleasantly entertained, and recommend it to lovers of Regency romance.

Would you listen to An Inconvenient Ward again? Why?

This book reminded me of the first Silhouette historical romances I used to read! I loved this book. And I thought Elizabeth Klett did a great job with the narration.
I look forward to reading the other books in this trilogy!

I enjoyed this listen very much

What a great listen this was. First, the narrator was perfect! She voiced Michael and Elizabeth with some serious skill The story had enough fun, intrigue and bad guys to keep you listening and the ending was very satisfying.

This is the first in a trilogy so I'm looking forward to the next installment.

I actually liked this book a lot. I felt that the love story portion was a bit frustrating but then remind myself that the point of reading is to feel something. This book provided insight to the culture of that time. It is interesting to compare how people spoke to each other under the rules of propriety versus how we communicate now. If the rules of today were applied, all the turmoil from this story would have been resolved in 30 minutes. I thought the resolution to the story was good but after getting to know the characters so well, it would have been nice to see how their lives played out. Maybe an epilog talking about their lives in 5 or 10 years could provide that closure and glimpse into their 'happily ever after'.

Nice, easy ,enjoyable, entertaining regency romance.
Although this is a typical regency romance the story is very well written.
There is the titled gentleman Lord Michael Denham and his unexpected, unwanted and unconventional ward Miss Elizabeth Rufford. Of coarse there is an attraction between the two, but because of the propriety of the era they resist this temptation and continue to do as society expects of them. Of coarse they can only resist for so long. The romance develops slowly and believably between them. There is some fun, intrigue and danger along the way to a nice HEA.

This is the first time I have listened to a book narrated by Elizabeth Klett. She is the perfect narrator for this kind of story. She did a fantastic job bringing the characters to life.

This is the first book by Audrey Harrison that I have listened to, and I was not disappointed in the least.

This audiobook was provided by the author, narrator or publisher at no cost for an unbiased review.

If we can have cozy mysteries, can we have cozy romances? (No explicit erotica) The plot is situationally funny most of the time (there are those money grubbing relatives), believable for the time period (Regency), and the characters are fully developed and relatable. All in all, I enjoyed it. Just my sort of escapist read.
E. Klett did fine work as narrator. Don't expect great voice range (for the men), but get caught up in her emo portrayals.
This audiobook was provided by the narrator, author or publisher at no cost in exchange for an unbiased review courtesy of AudioBookBoom.

This book surprised me. Lord Michael Dunham ends up with a ward due to a promise his father made to a good friend years ago. He does not want a ward and had rather stay in the country but will honor the promise made. Elizabeth Rufford the ward, has no desire for a season in London and wants to buy an estate in the country and manage it as she did her home until her father died from a lengthy illness. Having no brother to inherit it the estate went to her cousin. The cousin easily influenced by his wife who did not like Elizabeth , decided to send her to Lord Dunham since her father had set up the guardianship. The two have a very funny first meeting and she lets him know she is not interested in marriage or a season. He wants her to at least have one season before he will help her find a property to buy and take care of as she has told him that is her desire. The develop a wonderful friendship but Michael although he knows he is beginning to care for her will not marry. He believes that his father was mad and that one day he will go mad too. He will not leave a wife and children to deal with that as he and his sister had to do. He is a very good person and the two have several misunderstandings but in the end despite all things they will find a way to each other.

I enjoyed this love story so much. I love books in the Regency period. This is a beautiful start to a series I can't wait for the next book. I enjoyed the narration as well. I highly recommend.