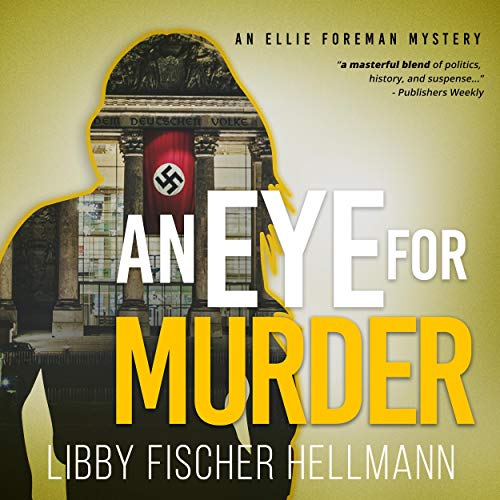 An Eye for Murder

August 1944. Prague is where the story begins, with a seemingly casual exchange. But in wartime, is any act, any one thing, trivial? Decades later, in contemporary Chicago, the consequences emerge through the medium of television. Documentary filmmaker Ellie Foreman gets a letter prompted by the success of her show Celebrate Chicago. One viewer was the elderly Ben Sinclair. When he suddenly dies, his landlady, Mrs. Fleischman, finds Ellie's name among his effects and writes to her. Ellie, who hasn't a clue about a connection to Ben, is curious. And she agrees to help dispose of Ben Sinclair's possessions. She became a filmmaker to help people tell their stories. The books and wartime relics Ben left behind - will they be enough to tell his?

All too soon, Mrs. Fleischman dies. Then Ben's things are stolen from Ellie's suburban home. The single mom, working to move past her ex, doesn't know what to think. But she has to scramble for work and is soon embroiled in producing a campaign video for a steel magnate running for a Republican seat in the Illinois Senate. Despite these distractions, Ellie stays focused on her odd link to the dead man and turns to her father, a retired lawyer with deep roots in Chicago's Jewish community, for insights into the mystery of Ben Sinclair.

In time, a terrifying scenario develops that reaches back into several pasts. From the political present of the North Shore to the buried memories of the city's ethnic neighborhoods, the components of Ben's story eventually merge into an explosive climax.

An Eye for Murder was nominated for an Anthony Award (Best First), which is one of the most prestigious awards in the mystery community.

“A masterful blend of politics, history, and suspense, this novel is well worth reading… sharp humor and vivid language… Ellie is an engaging amateur sleuth. Readers will hope they won’t have to wait too long for Ellie’s return.” ( Publishers Weekly)
“Complicated… fascinating… Hellmann has a beautifully tuned ear… which makes many of her scenes seriously funny… her film-editor instincts tell her when to let a scene run on and when to cut away.” ( Chicago Tribune)
"Taut, compelling and gripping, An Eye For Murder is one of the best mysteries I've read in years! Fast-paced, cleverly crafted, complex drama…I highly recommend it.” (Terri Figueroa, Romance Reviews Today)

What listeners say about An Eye for Murder

How Have I Not Heard of this Author Before???

I loved this book!!! How have I not heard of this author before? I was a big Sandra Brown / Iris Johansen / Nora Roberts fan for a long time; but their formulas became too predicable for my liking.

This is an interesting protagonist who's working on some long term personal issues of her own while trying to juggle a daughter,a job and trying to not be killed. I will absolutely be seeking out more by this author!

Narrator did well- I'd listen to other things she's narrated gladly.

I was provided with a free copy of this audio book by the author, publisher or narrator in exchange for an unbiased review.

Would you consider the audio edition of An Eye for Murder to be better than the print version?

I was provided this audiobook at no charge by the author, publisher, and/or narrator in exchange for an unbiased review.

Overall, the story is satisfying and believable and entertaining. All the things one wants in an audio thriller. This is billed as the first in the series of Ellie Foreman mysteries. It might be worthwhile checking out the rest.

Capably voiced by Karyn O’Bryant, the audio version of An Eye for Murder by Libby Fisher Hellmann is not overly produced with sound effects and distracting mood music, which I always appreciate. The story did require some accent work, and a little emotional depth from the narrator, all of which Ms O’Bryant handled masterfully. In fact, for the whole of the production, I was only pulled out of the narration at one point during a scene describing how Ellie dealt with an unrealized romantic moment. During a few paragraphs where Ellie describes how she brought herself to completion, the narration felt just a little disconnected.

There are also a few very minor issues with the story. For one, I find it very difficult to believe that the liberal daughter of a Jewish WWII survivor would be easily swayed to believe that a TEA Party darling could be even a little bit pro-union and pro-choice and still have party backing. There’s also a short scene describing in too much detail how Ellie chooses to hide a copy of an old document. She hid it in a seldom used window-well. That’s all we need to know. But these two issues and a few other quibbles are nothing to complain about.

An interesting mystery protagonist-#1 in series

I enjoyed this audiobook of "AnEye For Murder". Good plot, strong protagonist; single parent with teen trouble, an aging parent, a bum of an ex and trying to keep her own business going. I could totally relate to Ellie-we even share the first name of Eleanor!

I liked the narration by Karen o'Bryant-she did a good job of Jewish-American accent, got the intonation of the words frequently used by a German-Jew down pat.

The plot was tight with light romantic interludes-mostly focused on the mystery part.

I plan on continuing listening to the series..Libby Hellmann is a great author with an ability to bring the reader/listener in.

It seems that every time I try to listen to an Audio book they put me to sleep.

This is a good mystery with plenty of suspense. Some situations seem a bit contrived, but not so much so that it spoils the story. The characters are believable
enough and Karyn O'Bryant gives them distinctive and appropriate voices. Overall, this is a good story and exciting listen.

NOTE: I was given this free review copy audiobook at my request and have voluntarily left this review.

An eye for murder

i enjoyed this very much. it kept you on the edge of my seat. Couldn't stop listening until the end.

Great read, so good I re-read it as an audiobook

Great read, so good I re-read it as an audiobook. I'm a character reader, I get into the characters, their story, who/what they are. The author does a great job of developing Elle Foreman quickly & thoroughly. The significant characters in her writing are developed similarly along the way. This book is in all senses of the word, a thriller, from beginning to end. That’s it, no more spoilers from me. Outstanding read! I was given an Audible copy of this book & am voluntarily reading & reviewing it. Karyn O' Bryant’s narration adds to the book's enjoyment. (RIP Marley January 20, 2014 - July 24, 2018).

An eye for a good story

I really enjoyed this story. There was so much going on that it kept the story interesting and I liked the main character, I met her in the author's Georgia Davis series and I am glad to see she has her own series. I like her home life and found it added to the story making the lead character more human, a soft side at home with her daughter but a toughness that she needs against the bad guys. Very enjoyable listen and will be looking out for more audio books in this series.
Ellie isn't famous but he documentary has made her recognisable so she isn't surprised that a dead man has her name in his effects after watching her show but what she is surprised to find is that with no family his elderly land lady wants her to take his things. An act of kindness leads to an out come that no one ever saw coming. Ellie's world turns upside down when she tries to return the box only to find a body, then her house is broken into and a young boy she meets at the library is gunned down. Is there a connection? And what does a photo found in the box and taken in 1944 have to do with anything? Things get weirder when she discovers a connection between her own father and the dead man. At the same time with her ex husband struggle to pay for his daughter Ellie agrees to film a documentary for a Republican running for a Senate seat and learns more about the candidate than she bargained for. Will the past catch up with the present? Because someone is determined that some secrets should stay buried in the past where they belong.
I liked the narrator and thought she did a good job of building up the tension as the story unfolded and her voices for the characters were good.

The story overall was good but the heroine was so inept that occasionally we rooted for the bad guy just to get the story moving.

Kept me guessing until the very end!

I loved it! Lots of twists and turns, suspense, a bit of romance, and mysteries past and present that it kept me guessing until the very end! I can't wait to start the next book to find out what happens next!

I really enjoyed this audio. It was an exciting political thriller spreading from the nazis to present day. I loved the story line and was pleasantly surprised by this one as it wasn’t the usual series I listen to from Libby.