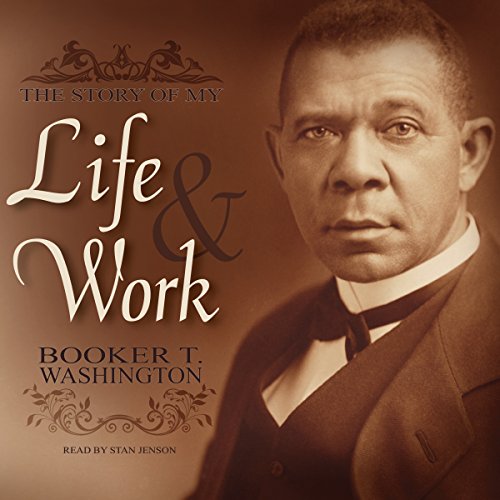 An Autobiography: The Story of My Life and Work

Booker T. Washington (1856-1915) was one of the most influential African-American leaders of the late 19th and early 20th centuries. Born a slave in Hale's Ford, Virginia, Washington moved to West Virginia after the Civil War, where he learned to read while working in a coal mine. After several years of part-time schooling, he enrolled full-time at the Hampton Institute, a secondary school for African Americans, and graduated in 1875. Washington spent the next six years teaching school in West Virginia and at Hampton before accepting an offer to start a brand new school in Tuskegee, Alabama. Washington founded what is today Tuskegee University in 1881 and spent the rest of his life making that institution financially viable and academically respected.

First published in 1900, The Story of My Life and Work was ghostwritten for Washington by a young African American journalist named Edgar Webber. Webber wrote the book with minimal oversight from Washington, who was on a European tour when his autobiography was sent to the publisher in the summer of 1899. Washington's correspondence, which was later published in the 14-volume Booker T. Washington Papers, reveals that he was furious with Webber's numerous errors and casual tone when he saw the work in print; in the 1901 edition of his Story reproduced here, Washington corrected the most egregious errors; he also removed Webber's picture from the book and his name from the index. At least in part because he was dissatisfied with The Story of My Life and Work, Washington urged his publishers to sell the book to poor, predominantly African-American buyers - so that wealthier, more educated readers would not have a chance to condemn the work. The Story of My Life and Work was very popular and sold more than 75,000 copies in its first four years, but Washington was dissatisfied and selected a more accomplished ghostwriter for Up from Slavery (1901), his second attempt at an autobiography.

What listeners say about An Autobiography: The Story of My Life and Work

I didn't realize this book was NOT written by Booker T. Washington, though he did correct errors the original author had made. This explains to some extent why there is more focus on the Tuskegee Institute and his work in creating and building, and improving upon it, and not quite as much on his personal life. Perhaps, as it is stated towards the end of this book Booker T. Washington and the Tuskegee Institute are synonymous since he devoted a large portion of his life to that organization - this book therefore does credit to the history of the man as it pertains to the birth and growth of that institution. The narrator's voice is quite deep and sonorous and almost put me to sleep a few times, but is not monotonous to me in anyway.

This autobiography was more "technical" than personal but still interesting. It covered Washington's involvement in the development of Tuskegee University in great detail.

The narration left a lot to be desired. It was torture for me from the beginning to finish this book but it is what it is. I think the narrator could have been cast more appropriately.