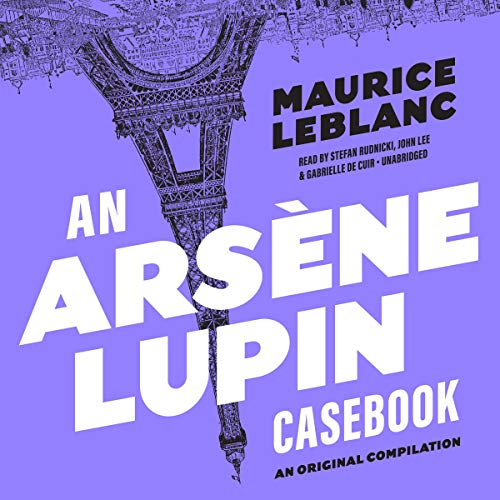 Discover the many faces of Arsène Lupin as you’ve never seen them before in this original compilation from Skyboat Media and Blackstone Publishing.

Arsène Lupin boldly makes a name for himself in “Madame Imbert’s Safe” as he attempts to steal from a couple who may be hiding more than just money, and he flaunts his keen eye as he traces a cold case in “The Queen’s Necklace”. In “The Arrest of Arsène Lupin”, passengers onboard a transatlantic steamer fear for their valuables when the captain announces that Arsène Lupin has snuck onto the ship...and he could be disguised as anyone. In “Sherlock Holmes Arrives Too Late”, Lupin goes head-to-head with Holmes, but someone from Lupin’s past may get in the way.

Just when it seems like Lupin is in a criminal league all his own, Herlock Sholmes appears. Similar to the famous English detective (but, owing to the complaints of Sir Arthur Conan Doyle, possessing an entirely different name), Sholmes travels to Paris to solve the case of the stolen blue diamond. Monsieur Lupin must employ all his ingenuity to avoid arrest and protect his reputation as the greatest thief the world has ever known. With daring escapes and intricate heists, this compilation showcases Lupin at his most cunning - and his most outrageous.

“The Arrest of Arsène Lupin” - read by Stefan Rudnicki

“The Escape of Arsène Lupin” - read by Stefan Rudnicki

“Light in the Darkness” - read by John Lee

“An Abduction” - read by John Lee and Stefan Rudnicki

“The Second Arrest of Arsène Lupin” - read by Stefan Rudnick

What listeners say about An Arsène Lupin Casebook

Imagine having a character you create be so prolific, that it inspired someone so much to the point of them writing several great stories in homage to your works only for you to be a little bitch about how your character is portrayed. Arsene Lupin is a more charismatic Sherlock Holmes and Conan Doyle knew this. Good set of stories with a funny history behind them. Worth the read since Herlock Sholmes is hilarious and the perspective of the stories being told by different people provides an air of mystery to the character of Lupin.