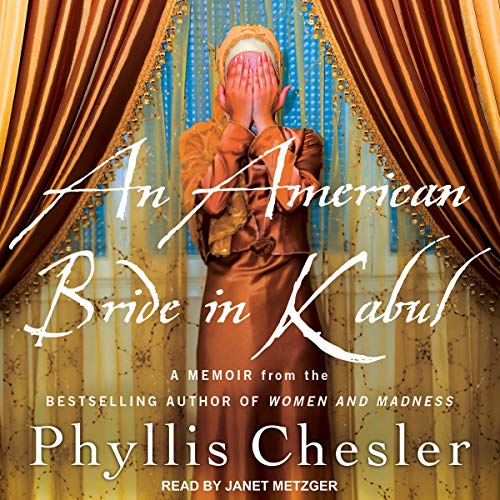 An American Bride in Kabul

Few westerners will ever be able to understand Muslim or Afghan society unless they are part of a Muslim family. Twenty years old and in love, Phyllis Chesler, a Jewish-American girl from Brooklyn, embarked on an adventure that has lasted for more than a half-century.

In 1961, when she arrived in Kabul with her Afghan bridegroom, authorities took away her American passport. Chesler was now the property of her husband's family and had no rights of citizenship. Back in Afghanistan, her husband, a wealthy, westernized foreign college student with dreams of reforming his country, reverted to traditional and tribal customs. Chesler found herself unexpectedly trapped in a posh polygamous family, with no chance of escape. She fought against her seclusion and lack of freedom, her Afghan family's attempts to convert her from Judaism to Islam, and her husband's wish to permanently tie her to the country through childbirth.

Drawing upon her personal diaries, Chesler recounts her ordeal, the nature of gender apartheid - and her longing to explore this beautiful, ancient, and exotic country and culture. Chesler nearly died there, but she managed to get out, returned to her studies in America and became an author and an ardent activist for women's rights throughout the world.

What listeners say about An American Bride in Kabul

Although I have listened to many books on Audible, this is my first review. "An American Bride in Kabul" deserves accolades. I was looking for a book that addressed the issue of misogyny around the world, and Phyllis Chesler does a brilliant job of describing the situation of most women in the Middle East. She tells her very interesting personal story but also provides a rich history of the people, the customs, and the religion, all well-documented and never boring. I am looking forward to reading (listening to) her other books.

Westerners will not believe

The book is heartfelt, sad, eye opening and unbelievable. The writer’s personal emotions and the subjective emotions of her American and Afganistan friends and family do not leave anything to be guessed. It may be revealed in different parts but come together as cohesive revelations of her experience as a bride in Kabul.

Very quickly you are not reading a book but watching a movie with vivid images. The day-to-day existence of an American bride amidst the Afghanistan household women, men and a husband that changed when they crossed the border. Depictions of a beautiful country, shops, bazaars, fabrics and scenery.

She dabbles in the Eastern politics from people in the know and conclusions of people that had emotional investment in Afghanistan, including herself.

You have to respect Phyllis’ research into history, previous books written in the same genre, social environment and culture. This brings muscle to the book of a culture that western society will not believe unless told by the one that encountered it first hand.

I read many books in this genre and this one dances with the best of them.

I experienced a very similar thing but in Zambia. your words have brought me peace.

This is an interesting account of a young woman's experience living in Afghanistan after having married her college sweetheart.

Since this time, Phyllis Chesler has obviously gone on to be an outspoken voice in second wave feminism and worked in women's rights, which was one of the main reason I bought this book.

The issues that I have are largely based on her views on foreign policy and in this sense they appear hyper American as you may expect from the title. Also some of her views regarding relativism, I stand slightly opposed to, but then she addresses her arguements well.

I would recommend this book, and it's certainly interesting, but some parts from a European perspective seem slightly naive.