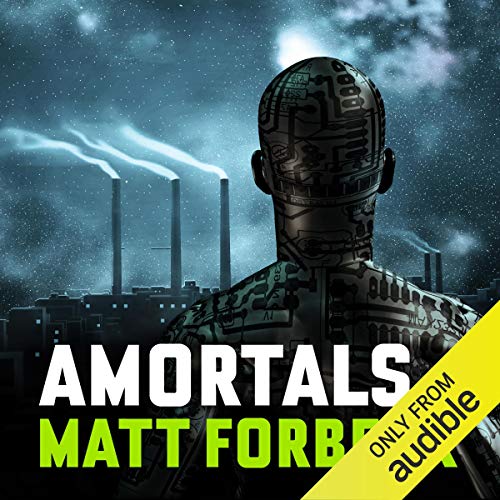 The very best person to catch your killer...is you.

In the near future, scientists solve the problem of mortality by learning how to back up and restore a person's memories into a vat-bred clone. When Secret Service agent Ronan Doonan is brutally murdered, he's brought back from the dead one more time to hunt his killer, but this time those who wanted him dead are much closer to home.

Matt Forbeck has worked full-time on fiction and games since 1989. His work has been published in at least a dozen different languages.

What listeners say about Amortals

An interesting tale with a moral

Don't let the lack of reviews make you think this is a bad book because it's not. I had no issues with the narrator and think they did a pretty good job. They definitely were better than the female narrators who feel the need to get all breathy and sexy sounding or the male narrators that sound ridiculous when they pretend to be a female voice. This narrator didn't take anything away from me listening to this book. The book itself was an interesting story, kind of a what if. It was rather refreshing not to have to get through sex scenes and a lot of cursing to enjoy the book. I don't have a problem with either one but they do get tiresome and this book was refreshingly void of that. It isn't knock your socks off action but it is a good stable story. I'm glad I read it. kp/jh

What would have made Amortals better?

The author took the time to learn and incorporate accurate details of the DC area. Yet the narrator didn't put any effort into the pronunciations. For example, every mention of the Potomac river is pronounced pa-tow-mAc rather than the pa-tow-mic which should be used by a native, like the main character. This is just the most annoying and obvious of such mistakes.
Additionally, the fact that the author is constantly referring to the river by its name is also somewhat infuriating. As the only river in the DC area of any major size and the only one featured in the book at all, is it REALLY necessary or logical to be calling it by it's proper name every other page? Haven't you established it is THE river?

I haven't gotten there yet. Its so bad that I may not. I will update if I do.

Would you be willing to try another one of Hayward Morse’s performances?

While this was an interesting concept, were I the author, I would fire my editor for letting me get away with the mistakes here.

If you are going to bother, buy a paper version. As least you can skip over the major flaws.

I disliked the ending.

NO! I think the writer wanted to write a screen play and had his eye on this being made into a film. With rows and rows of clones and fights.