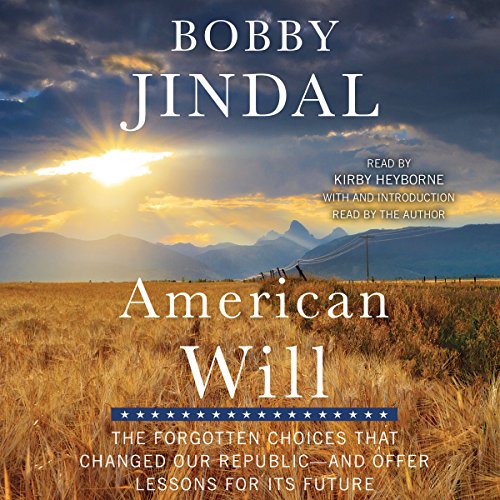 Governor Bobby Jindal of Louisiana, a much-talked-about 2016 presidential candidate, offers 14 lessons from our nation's past and discusses how they can be used to restore American courage, faith, and wisdom.

In American Will, Governor Jindal brings to life some of the greatest lessons in our nation's history and explores how they have defined our current state of affairs - including the exciting story behind the Louisiana Purchase, the conflict between the Federalists and anti-Federalists, Reagan vs. Nixon's welfare fight, and how the Cold War was nearly lost. Each event relates back to a moment in Governor Jindal's career where he had to make an important decision for the people of Louisiana.

Among the many topics covered in this audiobook are elective wars overseas, the size of government, church and state, freedom of religion, American exceptionalism, the nature of our enemies, and the consequences of a divided Republican Party. These important issues continue to define our country's legacy, and Governor Jindal will use his strong sense of history, purpose, and direction to guide his decisions now and in the years to come.

The next great turning point in American history will be the 2016 presidential election. Will we elect a follower or a leader? Will we pick a cynic or a statesman? Will we choose a politician or a problem solver? American Will's dramatic tales illuminate the courage, faith, and vision that we need in 2016 - and the government folly, corruption, and myopia that jeopardize our future.