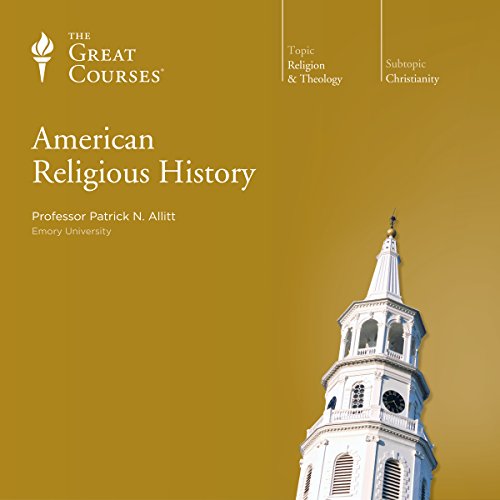 Have you ever wondered why America, unlike virtually any other industrial nation, continues to show so much religious vitality? Or why are the varieties of religion found in the United States are so numerous and diverse? In this vigorous series of 24 lectures, Professor Allitt argues that the best way to look for explanations of this truly remarkable vitality and diversity is to study the nation's religious history.

That's a task, though, that involves more than simply examining religion from the directions you might expect, including its formal beliefs, its ideas, its communal or institutional loyalties, and its styles of worship. It also requires looking at religion's influence on life "beyond the pews" - investigating the subtle but important links that have long brought religion into close contact with the intellectual, social, economic, and political concerns of Americans, such as Martin Luther King Jr. using a mixture of biblical references and appeals to patriotism to press the case for civil rights.

The lectures also address American religion as a sensory experience - a phenomenon whose deep spiritual and social meanings can in part be seen in the design of churches, synagogues, mosques, and temples; heard in the sounds of hymns, prayers, and chants; smelled in Catholic or Buddhist incense, or even tasted, as you discover when you learn why the casserole may be the most "Protestant" of all dishes!

An amazing series. Every chapter is perfectly constructed and the series at a whole is well-paced and engaging.

What a surprise. I loved it!

Would you listen to American Religious History again? Why?

I never would have sought out this course, but I picked it up on a whim, based entirely upon the reviews on The Great Courses website. I must say thank you to all the reviewers, because I found this to be one of the most delightful and captivating of the 30+ Great Courses I've listened to.

Professor Allitt is completely engaging, and packs each lecture with great portraits of historical significance, entertaining anecdotes, and recommendations for continued reading.

His enthusiasm for the subject is evident throughout, and his ability to help one view the U.S. through an outsider's perspective (he's British) makes him a modern day de Tocqueville.

If I had any complaint, it might be that non-western religions get very little attention. However, that very well may be the proper proportion given the dominance of judeo-christian religions in U.S. history.

Do not hesitate to listen to this course. It's a guaranteed winner.

I've always been curious about religious roots in the US and Prf Allitt provides a chronological account with interesting anecdotes about the many religious flavors.

WHAT TO EXPECT: Allitt(le) bit on the short side but seriously engaging. THE NARRATOR: Patrick N. Allitt excels in everything I've heard by him and absolutely should be considered one of the best teachers on the Great Courses. His style of presentation is consistently captivating and occasional off-script comments quite insightful. His grasp of the material (as well as the strong accent) make for an enjoyable classroom listening experience. He shows his cards in a few places by extensively focusing on early American Catholic activity, which is his specialty. THE CONTENT: It's the broadstrokes of American religious history, notably beginning before the British settlements. Covers early Spanish and French missions and fragmented records of indigenous religions, which is much appreciated. Since the topic is so daunting it must be structured in a series of snapshots; it nonetheless succeeds as a general survey. He draws on primary sources (records, letters, poems, etc) that enhance and drive home his points. It's not an exhaustive series by any means but works for basic education on the subject. OVERALL: Amazing job, one of the most enjoyable Great Courses I have heard. I wholeheartedly recommend.

I'm an ordained Lutheran pastor so this is familiar ground. But I did learn things I hadn't known before. And it is a really accessible, cogent overview of the religious trends in a nation based on the freedom to pursue a diversity of religious expressions (something I think we lose track of these days with a rise in xenophobia, etc.....). I warmly and highly recommend this course.

I certainly would not have organized the class in the way that he did, but I did learn a number of things. Most of the focus was on post-Civil War history, which is good with me. I have read more about early American Religious history anyway.

While I did enjoy it, I did not think it was as good as The History of Christian Theology, but it was worth listening to.

I enjoyed this study and the presentation. the evolution of our relationship with religion and God is interesting and the professor keeps his views at bay while offering a full scope the American religious history.

No matter what, you can't deny how religion helped form the United States. This courses covers many of these groups, how they made America, what impact they had on its history, and how it has been used to make changes. It starts in England and moves through the two Great Awakenings, new religions, Martin Luther King, religion in the civil rights, and then other religions that make up America. Professor Allitt was great because he is religious but he is from England so he has knowledge from the outside and on the inside. Any history is worth studying and this is no different.

Allitt is one of my favorite lecturers. Wonderful voice. Smart. No hidden, or visible, ideological agenda.

WINNER! ~ Well worth your time~

If you want a solid chronological religious overview of the United States, look no further.
Almost no wasted words as our professor churns through these deep waters at a brisk pace yet helps you feel that you're getting a solid look at each vantage point.
Excellent.

A very balanced and informative series. Well read and has interesting anecdotal snippets.