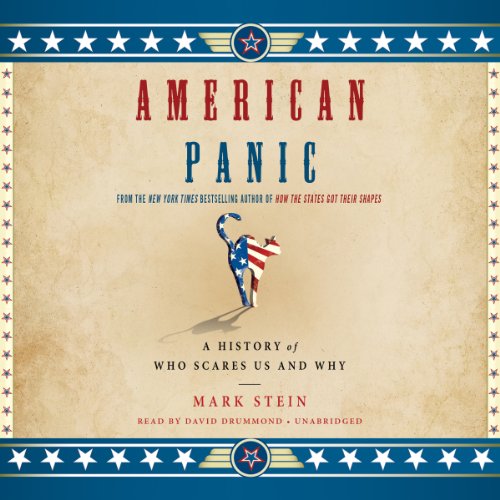 In American Panic, New York Times best-selling author Mark Stein traces the history and consequences of American political panics through the years. Virtually every American, on one level or another, falls victim to the hype, intensity, and propaganda that accompany political panic, regardless of their own personal affiliations. By highlighting the similarities between American political panics from the Salem witch hunt to present-day vehemence over issues such as Latino immigration, gay marriage, and the construction of mosques, Stein closely examines just what it is that causes us as a nation to overreact in the face of widespread and potentially profound change.

This audiobook also devotes chapters to African Americans, Native Americans, Catholics, Mormons, Jews, Chinese, and Japanese peoples, communists, capitalists, women, and a highly turbulent but largely forgotten panic over freemasons. Striking similarities in these diverse episodes are revealed in primary documents Stein has unearthed, in which statements from the past could easily be mistaken for statements today. As these similarities come to light, Stein reveals why some people become panicked over particular issues when others do not.

What listeners say about American Panic

I bought this book thinking it was by Mark Steyn... after a bit of listening, I realized my error.

Would you try another book from Mark Stein and/or David Drummond?

Would you ever listen to anything by Mark Stein again?

Did David Drummond do a good job differentiating all the characters? How?

This book was a really good idea that the author did not seem ready for. The book wanders in topics and does a poor job of building bridges between the different historical accounts yet the author keeps discussing the history as though it is all related and has similar aspects. The parallels of history might be there but they are not found in this book. It is a shame. This could have been really good.