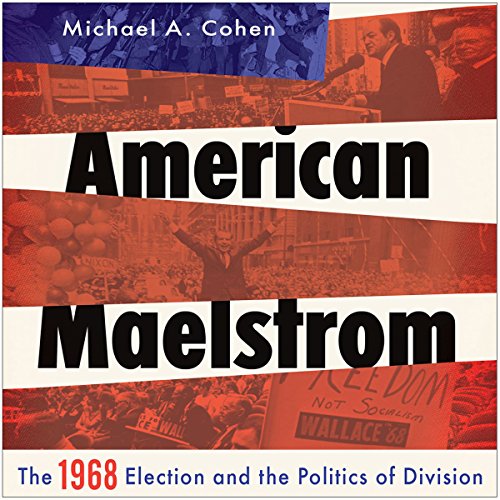 American Maelstrom: The 1968 Election and the Politics of Division

By: Michael A. Cohen
Narrated by: Stephen Paul Aulridge Jr.

American Maelstrom captures the full drama of the watershed election of 1968, establishing this year as the hinge between the decline of political liberalism, the ascendancy of conservative populism, and the rise of anti-government attitudes that continue to dominate the nation's political discourse. This sweeping and immersive book, equal parts compelling analysis and thrilling narrative, takes us to the very source of our modern politics of division.

In 1965, Lyndon Johnson announced the most ambitious government agenda in decades. Three years later, everything had changed. Johnson's approval ratings had plummeted; the liberal consensus was shattered; the war in Vietnam splintered the nation; and the politics of civil rights had created a fierce white backlash. The National Committee for an Effective Congress warned of a "national nervous breakdown".

The election of 1968 was immediately caught up in a swirl of powerful forces, and the nine men who sought the nation's highest office that year attempted to ride them to victory - or merely survive them. On the Democratic side, Eugene McCarthy energized the anti-war movement; George Wallace spoke to the working-class white backlash; Robert Kennedy took on the mantle of his slain brother. Entangled in Vietnam, Johnson, stunningly, opted not to run again, scrambling the odds. On the Republican side, Richard Nixon outhustled Nelson Rockefeller, Ronald Reagan, and George Romney, by navigating between the conservative and moderate wings of the Republican Party. The assassinations of Martin Luther King, Jr. and Kennedy seemed to push the country to the brink of chaos, a chaos reflected in the Democratic Convention in Chicago, a televised horror show. Vice President Hubert Humphrey emerged as the nominee, and nearly overcame the lead long enjoyed by Nixon, who, by exploiting division and channeling the national yearning for order, would be the last man standing.

What listeners say about American Maelstrom: The 1968 Election and the Politics of Division

How the words and images of 1968 linger today…

For me this was a very important read that not only filled in significant gaps in my knowledge of how we arrived at this political landscape but also provided many rich and rewarding jumping off points for further exploration.

A must read to understand national politics today

Outstanding subject and sold reading performance. I can't understand why this book was not prominently mentioned by political pundits during the recent presidential campaign. Trumps campaign was straight out of Nixon's play book with a heavy dose of Wallace thrown in. Clearly the 68 election was the pivot point of national politics and the birthplace of the political landscape today.

The reader mispronounced so many names and common words (i.e., when did "vacillate" become "vaxillate"?) that it was very noticeable and detracted from the book.

Was American Maelstrom: The 1968 Election and the Politics of Division worth the listening time?

It was worthwhile insofar as it described the political events of 1968. It did not do so well in its announced premise, namely to relate that election to subsequent politics and elections. The attempts to do were simplistic and strained.