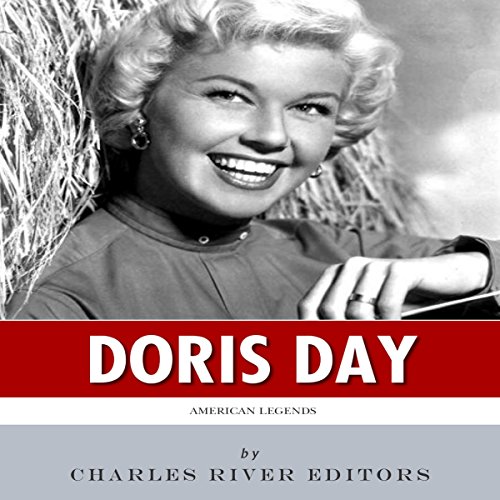 "I've been through everything. I always said I was like those round-bottomed circus dolls - you know, those dolls you could push down and they'd come back up? I've always been like that. I've always said, 'No matter what happens, if I get pushed down, I'm going to come right back up.'" - Doris Day

It goes without saying that few people have a career spanning eight decades, yet that claim to fame is occupied by the legendary Doris Day, who got her start in show business as a singer in a big band in 1939 and has not let up since. From there, Day went on to record dozens of albums and hundreds of songs, winning a countless number of awards on the way to being one of the 20th century's most popular singers. One of those recognitions came just a few years ago in 2011, when Day, by that time nearing 90 years old, released a new album that charted ninth in the UK Top 40 Albums, making her the oldest singer ever with that distinction.

Her musical career would've been impressive enough, but Doris Day is just as well known today for her film career, which wasn't so bad itself. Though her time in Hollywood was much shorter in comparison to her music career, she nevertheless managed to reach the top in that industry as well.

What listeners say about American Legends: The Life of Doris Day

The narration is not good. It's rushed and lacks the proper emotion. To be more specific, the narrator reads the entire time as if with a smile on her face, even during the darkest periods of Doris's early life. Sounds rushed and ill performed. Couldn't get though a single chapter.

Great book, if you're a Doris Day fan you don't want to miss this one.

Would you try another book from Charles River Editors and/or Deborah Fennelly?

I might, depending on the subject, but not because of the author.

The ending of this essay on Doris is the weakest part, and least researched of the entire audio experience. I felt that I only walked away learning one new thing about her life in her post-movie career, and was a bit disappointed that many things were left out, which people who nothing about Doris Day would have enjoyed learning.

The performance wasn't the best, as it was often spliced together rapidly, as if to save on time, and at times turning Deborah Fennelly's voice (which is pleasant to listen to in moments of clarity and smoothness) robotic.

Was American Legends: The Life of Doris Day worth the listening time?

This was worth listening to if you needed a brief overview, or reminder of Doris Day's career. However, if you are looking for an in depth biography, this is definitely not it.

Several pivotal episodes in her life are completely skipped over after 1964 including her son's motorcycle accident that brought them closer together, the Charles Manson scare, her affair that she admitted to in her 1976 autobiography, and her television specials (not series), and much more. Other aspects of her life are omitted, including how her song "It's Magic" from her first film was nominated for the 1948 Oscar for best song, and reached #2 on the billboard charts. There is no mention of her many friendships and relationships with Hollywood peers, (she and Judy Garland shared an admiration for each other, Jack Carson who starred opposite her in Day's first three movies for Warner Brothers helped to teach the inexperienced Doris how to act for the camera), nor her nervous breakdown after filming "Calamity Jane", which kept her from performing "Secret Love" at the Oscar ceremony that same year, and causing a misunderstanding/public controversy. Many of her great films such as "That Touch of Mink", "Teacher's Pet", "Midnight Lace", are completely overlooked, while most are reviewed with old critiques, and no new points of view emerge. For example, "The Ballad of Josie" (1967), although a low point in Day's film career when it first premiered, deserves another look, as an early feminist western movie, and includes some dramatic and well-acted scenes that are rather moving.I understand for brevity, many parts of her life are kept out of this essay on Doris Day, but if you are a reader/fan who really wants to get to know her, I recommend her frank and personal autobiography from 1976, "Her Own Story" (still one of the best autobiographies written about a Hollywood icon), or the documentary "It's Magic" available on dvd. The best moments of this audiobook essay are the personal quotes taken from Doris that begin each chapter, and the clever way her last name "Day" is used for each chapter title. Overall, "American Legends: The Life of Doris Day" serves as a quick bullet point review of her life, which will cheat any new fan wanting to discover the woman behind the golden smile for the first time.