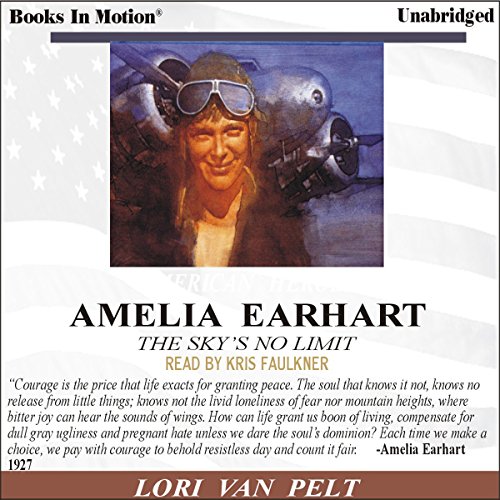 As a tomboy growing up in Kansas, Amelia Earhart delighted in trying new and risky things, once she even built a roller-coaster in her grandparent's backyard.

In her 20s she fell in love with flight while watching an aerobatics exhibition and grew even more enthralled when she took her first airplane ride. At age 24 she earned her pilot's wings and in 1928 took part in the transatlantic "Friendship" flight. In 1937 she married publisher George Putnam who managed her career and promoted her zealously, ensuring her status as the world's best-known aviatrix. The next year she flew solo over the Atlantic, afterward receiving the Distinguished Flying Cross, and began championing the efforts of women to explore careers traditionally held by men.

Tragically, just days before her 40th birthday, her plane vanished en route to a tiny island in the Pacific Ocean as she neared the end of her round-the-world journey. After an exhaustive search, no trace of the plane or Amelia was ever found.

"Everybody ought to have basic knowledge of Earhart; this is a good place to acquire it." (Booklist)
"This exceedingly well-written tribute to Amelia Earhart portrays her as a true American hero, one whose memory needs to be rekindled in these trying times." (Col. Walter Boyne [USAF, ret.], former director of the National Air and Space Museum)

What listeners say about Amelia Earhart

There are discrepancies - especially early on- in this biography of Amelia Earhart that can be annoying to those more broadly researched readers, but Van Pelt's story does offer a good sense of pilot Amelia and includes well timed quotes. It also provides information about her father and his wives that I have not read elsewhere.