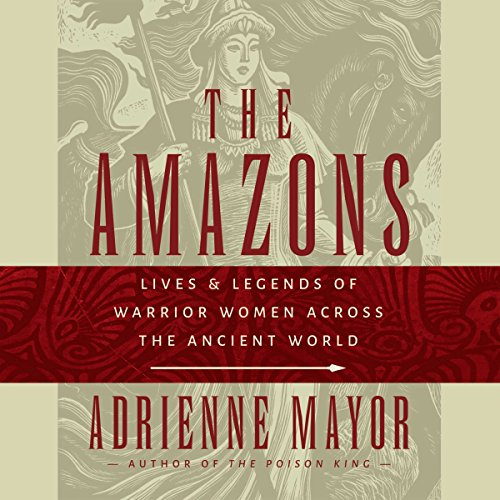 Amazons - fierce warrior women dwelling on the fringes of the known world - were the mythic archenemies of the ancient Greeks. Heracles and Achilles displayed their valor in duels with Amazon queens, and the Athenians reveled in their victory over a powerful Amazon army. In historical times, Cyrus of Persia, Alexander the Great, and the Roman general Pompey tangled with Amazons.

But just who were these bold barbarian archers on horseback who gloried in fighting, hunting, and sexual freedom? Were Amazons real? In this deeply researched, wide-ranging book, National Book Award finalist Adrienne Mayor presents the Amazons as they have never been seen before. This is the first comprehensive account of warrior women in myth and history across the ancient world, from the Mediterranean Sea to the Great Wall of China.

Mayor tells how amazing new archaeological discoveries of battle-scarred female skeletons buried with their weapons prove that women warriors were not merely figments of the Greek imagination. Combining classical myth and art, nomad traditions, and scientific archaeology, she reveals intimate, surprising details and original insights about the lives and legends of the women known as Amazons. Provocatively arguing that a timeless search for a balance between the sexes explains the allure of the Amazons, Mayor reminds us that there were as many Amazon love stories as there were war stories. The Greeks were not the only people enchanted by Amazons - Mayor shows that warlike women of nomadic cultures inspired exciting tales in ancient Egypt, Persia, India, Central Asia, and China.

Driven by a detective's curiosity, Mayor unearths long-buried evidence and sifts fact from fiction to show how flesh-and-blood women of the Eurasian steppes were mythologized as Amazons, the equals of men. The result is likely to become a classic.

What listeners say about Amazons

This book references and gives detailed discussions of images throughout. There are MANY color plates, b/w images, and maps that are, unfortunately, NOT included for download. The verse surrounds the visuals, and they should be experienced in unison. It is difficult to fully comprehend without being able to see what is being referred to.

Otherwise, I LOVE this book... and really want to see the images. I submitted a request for a PDF file... Audible responded that my "feedback has been forwarded to the proper department so it can be reviewed and taken into consideration".

Exceeds expectations. I promise. By a lot.

This book is fantastic. This is tangible, human, personal scholarship fused with the fascinating, potent history of "Guns, Germs & Steel." It's the same duration, actually, yet it doesn't drag like GG&S because the entire book is focused squarely on people, painted vividly. Seriously, I don't remember the last time I found a history book this good.

The Greek myths are, of course, myths, but Adrienne Mayor pulls together a multitude of ancient sources - writers and artists in equal measure - and 21st century archaeology to assemble a picture of the real, powerfully egalitarian ethic group behind the legendary women warriors. It's like having an enthusiastic guide walk you through a living museum of Amazon attire, weapons, lifestyle, history, portrayal, recreation, and sex (except you can't see the artifacts she's pointing to, but you'll get over it).

Adrienne Mayor does a champion job of unpacking what the Greeks wrote about the Amazons in their histories and myths, what the people they called the "Amazons" were most likely like, and_why_Greek and later accounts differ from the probable reality.

For example, some writers in the last couple centuries B.C. and the first few A.D. claimed that the Amazons maimed their male infants. Adrienne Mayor, in response:
1. Puts forward several reasons why men of the regions ascribed to the Amazons may have had high rates of hip dislocations, broken leg bones, and consequent limps.
2. Provides historical, bio-archaeological, and bio-ethnological support for these explanations.
3. Suggests why male Greek writers listening to travelers' tales would have jumped to the conclusion that the injuries were inflicted on the men by the women at birth.
4. Keeps an interesting narrative running through the whole thing.


Unfortunately, the narrator has a tone and inflection which reminds me of the recorded women's voices which make announcements in airports and other high-traffic buildings. The last sentences of paragraphs sound as though she's smiling as she's speaking and deliberately wrapping the sentence up and tying a bow on top. My opinion is, of course, subjective, so listen and decide for yourself.


The only other problem is that I listened to this before I read anything else relating to the Amazons. Now I catch myself grinding my teeth whenever I hear or read about the Amazons amputating/cauterizing their right breasts or whenever a (well-meaning) feminist refers to the Amazons as existing only as a male fantasy of power and validation. Breasts don't get in the way of archery unless your bow is big enough to draw to well behind your head and "the Amazons" were an actual people group. Please stop ignoring them - they practiced your principles!

What made the experience of listening to Amazons the most enjoyable?

The scenes and people were so vivid, it was so easy to put myself into their shoes. These women were awesome!

There are images referenced but there is no accompanying PDF, which is disappointing but not critical.

Not a fictional novel, but wow!

The narrator is great. It can’t be easy narrating... well, a historical text. Pronunciations of all those names, places and tribes of all those languages, is beyond impressive. Seriously, she didn’t skip a beat (which is what I expect👍🏽).

This is 2017, times have changed since I studied history in school (thank the Gods). She writes with a modern tone without being flippant. It’s officious without being pretentious, overbearing and most importantly, without being boring.

There’s SO much info in this book; I’ll need to reread and rehear it a few times. Maybe if you’re already very familiar with the legends, you will breeze through. Being humbled myself, it was still easy enough to follow.

Ah to the author, thank you for writing this book. Thank you for digging so deeply into the nooks and crannies.

Into the Myths and Far Beyond Them

Adrienne Mayor impressed me with her book Greek Fire, Poison Arrows, & Scorpion Bombs. To have her tackle the subject of the Amazons, a subject of personal fascination to me... suffice it to say, I expected big things. And I got bigger things.

Beginning with the myths of Atalanta, this book quickly delves into the historical and often contradictory accounts behind the legends through critical examination of archaeological evidence, literature, and art. The scope of it is nothing less than astounding as the level of influence the Amazons had on the ancient and modern worlds becomes known. No stone is left unturned. The personalities are examined in as much detail as the clothes, the weapons, and the territories they staked out.

As narrator, Fran Tunno does a respectable job for the most part. However, she also joins a great many throughout modern culture who have difficulty pronouncing many of the names. She pronounces the "w" in "sword," so you can imagine how badly mangled some of the Amazonian names become by comparison. Some of these names will have different pronunciations, and it gets a little cartoonish at times. But if you can deal with that, the strength of her delivery is otherwise quite solid.

This is a book that will eventually see hardcover for my personal library. Part of that is due to the sheer amount of quality information, and part of that is because there are constant references to photos and illustrations that are not packaged with the audio.

I enjoyed this book. The author presents information on the historical peoples who the Greeks interpreted as Amazons (Scythian, Illyrian and Thracian women).

The narrator needed to pay more attention to words she was unfamiliar with. She routinely mispronounced names and places (Dionysus, Khazakhstan). Otherwise, the narration was fine; don’t let it stop you from buying the book.

Yikes with the title being so awesome, I thought the book would be too...... not so much! bummed.

At times, it seemed very repetitive. Also the narrator pronounced some of the familiar names in an unfamiliar way, which may just be me, but it's hard to get engrossed in a book when you have to continually think who the narrator is referring to.

Did Amazons inspire you to do anything?

I almost stopped listening halfway through the book because I was so annoyed that the narrator kept referencing image numbers. It's an audiobook. I don't have images. I have never run into this before, but it's really aggravating because it interrupts the flow of the narration.

This is a well written and insightful book. Reading it will be a learning experience for anyone. It is, unfortunately, cursed with a narrator who made no effort at all to learn the correct pronunciation of many, many words. I recommend reading in on paper or in Kindle, but NOT in the audiobook.

i love history but was so bored by this.
I would love to be able to return it but it's been too long.

Getting to know The Amazons

Would you consider the audio edition of Amazons to be better than the print version?

This is not better than the print version as there are lots of references in the text to pictures in the book that the listener doesn't get to see.

I loved the stories of the Amazons in myth and legend

What aspect of Fran Tunno’s performance might you have changed?

The life and loves of warrior women

I realy enjoyed the experience of this book . I would have got more out of it if I'd had a map and the picture plates available.

Excellent material for anyone interested in the historical and mythological aspects on Amazons. It is probably one of the most thorough pieces of material on the subject today. Highly recommend.

The narration is very pleasant as a bonus.