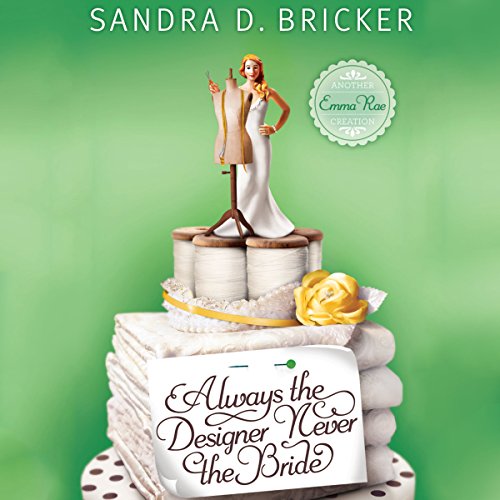 Always the Designer, Never the Bride

It's taken Audrey Regan years to establish herself as a wedding dress designer, and to date she's been roped into creating dresses for nine of her girlfriends. Request number 10 follows her vow to "just say no!" and comes from her very best friend. She can hardly turn Carly down!

Audrey arrives in Atlanta early to perform all of her maid-of-honor duties along with final fittings for a one-of-a-kind dress. But Carly's wedding is nothing short of an event, complete with Prince Charming, and the festivities make Audrey question whether there's a prince of her own anywhere in her future.

Enter the groom's brother and best man. Shaggy-haired, tattooed bad boy J. R. Hunt couldn't be any more different from Prince Charming if he rode in on a Harley Davidson. Oh, wait. He actually did ride in on a Harley!

What listeners say about Always the Designer, Never the Bride

Would you listen to Always the Designer, Never the Bride again? Why?

Oh yes. I would so listen to this story again. The narrator, Ann Marie Gideon, does such a wonderful job of pulling me into the story and making me feel like I'm right in the middle of watching in my mind's eye a boy meets girl romance movie.

What was one of the most memorable moments of Always the Designer, Never the Bride?

The scene when Devon not only puked at his wedding but on his bride's dress and the dress designer, Audrey, shrieked at the dress getting ruined instead of the bride shrieking because of her husband collapsing. I thought it was memorable and a bit amusing at the reaction of all.

My favorite scene is when Audrey and her group of friends, plus the help of Billie the receptionist, all were able to give We La Mount the shaft when he tried to rip off Audrey of her rubenesque wedding dress design for Lisette. It was quite obvious the jerk was planning to claim the design as his own but Audrey was smart enough to move swiftly and put a wrench in his plans.

When Audrey broke down in front of J.R. about her woes and he just tried to be supportive. He didn't try to fix her problem but just listened and try to give her what she needed to push passed her momentary despair. Not many people get it that when a woman breaks down she isn't looking for a person to rescue her or fix what is wrong or have answers for a solution... sometimes we just need a shoulder to cry on and vent. And J.R. gave Audrey that when she needed it the most.

This third book in the series was sweet and had a long slow burn romance by Audrey and J.R. but it was worth the ride to see them get to where they were meant to be. Their romance wasn't as big as I felt that Emma and Jackson's was but it had promise at the end for lots more to come. I really enjoy how this author gives us readers a sweet hopeful story with some obstacles that weren't over the top but just some of the troubles most people create for themselves and could solve if they would just get out of our way. I also like that the author brings a little bit of Christian faith into the story as part of the characters' back story or part of their character make up but without making it all bible thumping preachy. A little goes a long way and I wish other authors did the same, give just a little and not try to hit us over the head with their faith.

I look forward to doing some more immersion reading of author Sandra D. Bricker's fourth book in the series "Always the Baker, Finally the Bride" next.