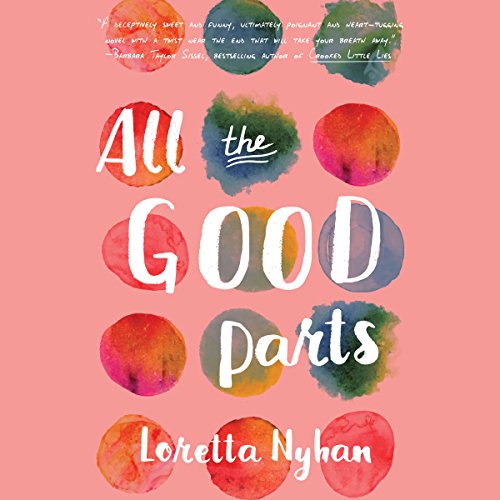 All the Good Parts

At thirty-nine, Leona Accorsi is broke, single, back in school, and living in her sister Carly's basement. She's perfectly content being quirky Auntie Lee to Carly's four children. That is, until Leona's doctor tells her that if she wants to have a child, she'd better do it now.

Leona does want a baby. She always has, but the circumstances have never been right. Now she has a huge decision to make: face motherhood on her own or risk missing out on its rewards.

Unfortunately, she's let her romantic life go stagnant. She barely even knows any single men. She has just a few prospects: a Vietnam vet and partial amputee, his intimidating son, the sweet but troubled man who tutors her niece, and a fellow nursing student she's never actually met.

As Leona discovers more about each one, she realizes any of them could be the right man for the job. The more important question is, has she become the right woman?

What listeners say about All the Good Parts

I had just finished a great book, but it was one that left me feeling spent. It'd wrung me out. I wanted a lighter read but didn't want fluff. So, I found this book and it was exactly what I needed.

It's a heartwarming tale, but not saccharin sweet. The characters are dealing with difficult things, but they deal with them in the way we'd all hope to, with a gentle hold. They embrace them, but are not devastated by them.

I love the relationships between Leona and her family, but there was something special and genuine in her relationships with her home health patients. I've seen it in real life and it was beautiful to "see it on the page".

Surprised I liked it. but I did!

I listened to Digging In (another of the author's book) free with Kindle Unlimited, and since it was ok, I decided to listen to another of her free books, despite the subject matter. Let me say that I have zero interest in "I want a baby" novels so it was ONLY because it was free, that I tried it. What a nice surprise. It was about so much more.

I particularly liked that the main character was in nursing school and was a home health aid struggling to make ends meet. I'm tired of the "usual"--takes place in NY, main character always seems to be a writer or has some profession that allows her/him to have not a care in the world about money and is able to take off work for months and months. This was NOT that story. While I don't have any inherent interest in the home health aid profession either, it allowed the author to develop Leona's character as well as the a couple of the older people she cares for. And I found I was actually interested in her job!

There were quite a few characters in this book and some did get short shrift in the development department (in particular her sister Carly's two boys), but I found I didn't mind too much. There was enough going on plotwise and characterwise to keep me engaged.

Narrator was great. A lot of ideas presented really were very thought provoking. Interesting story. Good character development. Got a little bit long at the end!

I really enjoyed most all of this book except for all of the crude language used by the women. In the real world, I don't know many Mothers, who care about their families who use this kind of language. I was also shocked that a 13 year old would be allowed to be in the room while her Aunt was inseminated! This could have been a very sweet story, filled with lots of wisdom about love and life but all the other stuff ruined it for me.

Loretta Nyhan takes you on a descriptive journey through a woman's break through while falling for a man going through a breakdown.

All The Good Parts appeals to women and men as it reflects throughout the main story on the choices we each have made that impact each phase of our own lives.

I would highly recommend this book as an Audible listen in the car as I did with my fiancé and aging mother. It made a long road trip way more fun. We were glued to the story for twelve hours our first session. My mother will need a hard copy for Christmas to finish it. We enjoyed and finished it on our way home. We could not wait to get back in the car to find out what happened.

A great holiday gift as family issues rise to the top of everyone's list and include long road trips, get yours today!

Really good, well-written story, made even more enjoyable by Karen Peake's clever, sensitive narration. There's a lot of nuance in the dialogue and she doesn't miss a trick.

I couldn't make it past the first chapter. The style of writing was too repetitive and rhetorical.

You can’t ask for much more in a sweet, romance. There was one “loose end” not tied but I think the point was since the MC didn’t know what happened, we weren’t supposed to either. Either way, very much enjoyed this story and would’ve easily used a credit but got it for free with kindle unlimited.