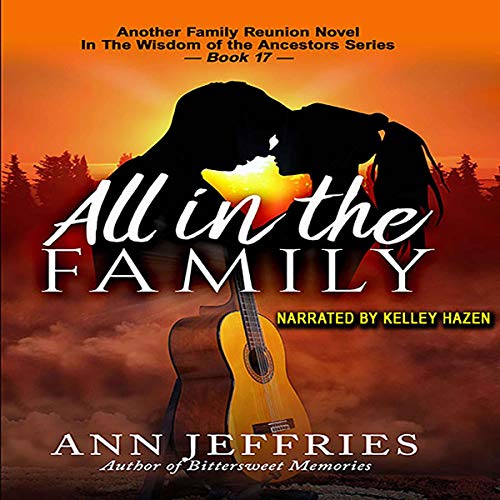 All in the Family

It’s All in the Family

When you know it’s right, you don’t let anything stand in your way. That’s what Tucker Cavanaugh thought on the bright fall day when a vision of loveliness moving like a graceful gazelle crossed his path on the university campus. Abandoning his friends, he gave chase only to lose her in the crowd of students and professors. Still, he pledged to find her again and when he did, he wouldn’t let her slip away.

When the young, handsome US Marine medical student approached her, Whitney Ivy Alexander, a law school student, wasn’t looking her best. Yet, one look into Tucker’s handsome face, she knew what they would be together was completely right for the both of them. Still, could their interracial romance withstand the challenges they faced?

Dedicated to duty is Commander Helen Marlowe’s mantra. Her Code Name: Helen of Troy or HOT as her counterparts and pals chose to call her. Not because of the temperature or her disposition, but because of her extraordinarily attractive physical features. Assets her camouflage battle dress uniform fatigues, Cammy hat, and aviator shades failed to disguise. No matter how much activity surrounded her, that wickedly handsome man, whose face and physique had been created by the gods on a particularly good day, was stuck in her head, preventing her from operating at full capacity.

Independently wealthy US Air Force jet fighter pilot Captain Shawn Baxter Rodgers, Code Name: Hot Rod, stood over six-four with the body of an Adonis, clever hands, and a grin on his too-handsome face that promised endless acts of naughtiness. Shawn’s and Helen’s weekend R&R to Las Vegas produced a daughter Helen had never seen before she disappeared from his life. Shawn was raising their daughter alone, but vowed he’d find the love of his life to make them a family. Could the life he wanted to offer Helen shake her commitment to her secret agent life?

What listeners say about All in the Family

I was voluntarily provided this free review copy audiobook by the narrator and found it fun. I've listened to the books from this series out of order, so it's interesting to go into the future and see some of the kids grown. All these books are based on family and friends and its can be uplifting listening at times and at others you just find yourself laughing out loud and you have to back it up because you missed something. The interesting and intriguing characters keep you listening, wondering what unexpected twist will happen next. It's very enjoyable and I'll have to check out more books from this series.

All in the Family by Ann Jeffries pulled me in from the very beginning. I love how this Family Reunion book is both part of a series and a standalone listen. The author writes compelling characters and realistic situations. Kelley Hazen is incredible performing this book. She brings the characters to life with her voice. I could hear exactly who was speaking. I love how talented she is in performing various ages, gender, and ethnicity.

All in the Family

When Tucker first saw Whitney, he knew it was meant to be. As he got to know her and her family, it just confirmed it...

Ann Jeffries adds another fantastic story to her Family Reunion - Wisdom of the Ancestors series.

Kelley Hazen delivered another very enjoyable performance. It amazes me how she can do so many different characters voices flawlessly.