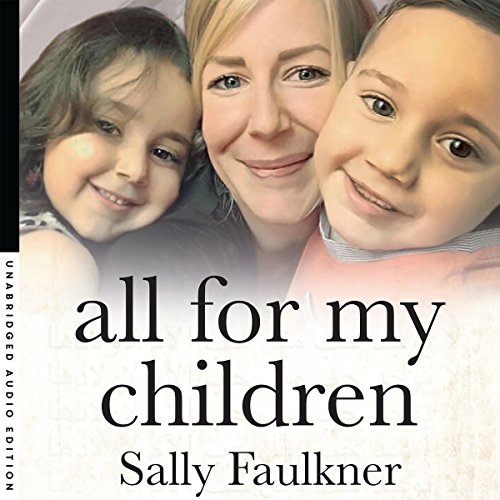 All for My Children

When her husband refused to return their children, and the Australian government and Lebanese justice system couldn't help, Sally Faulkner flew across the world with a television news crew to try to bring them home herself.

All for My Children is Sally Faulkner's unforgettable true story, showing how one Australian mother's life fractured in the moment she kissed her kids good-bye. This is a story Sally had to tell, because it is the only way her children, Lahela and Noah, will know she never stopped trying to bring them home.

In May 2015 Sally hugged her children as they left Australia for a two-week holiday to Beirut with their father, Ali Elamine. Though Sally and Ali were separated, custody of two-year-old Noah and four-year-old Lahela had not been an issue. The kids lived with Sally in Brisbane, and their dad often visited from his home in Lebanon.

To Sally, everything seemed fine. Twenty-four hours after that farewell, Ali said, 'The kids aren't coming back.' It was every parent's nightmare...and it was only going to get worse. After 10 months without any contact with her children, missing birthdays and her daughter's first day at school, Sally had exhausted every avenue she could - pleading with Ali, using the courts, calling government departments and contacting the media.

Waking in a Beirut prison cell handcuffed to a 60 Minutes television reporter, Sally couldn't help asking herself, How did I get here? Looking back, 21-year-old Sally had scored her dream life as an Emirates flight attendant. She was dazzled by a world far removed from the suburbs of Brisbane. Then she met Ali, a charismatic charmer with a Californian accent who, she thought, was the perfect man; married him; and had the children she'd always hoped for. But her dream life didn't last.

What listeners say about All for My Children

A sad story but glad I read it

Like most Australians i had seen this story unfold on tv. I really feel for the children and their mother. The story is well told and i believe an honest account with added insights and reflection.

Very interesting account and I wish that there was more that we could do for this family. A story imbued with many lessons. I only hope that your situation improves and the children are given an opportunity to know their mother.