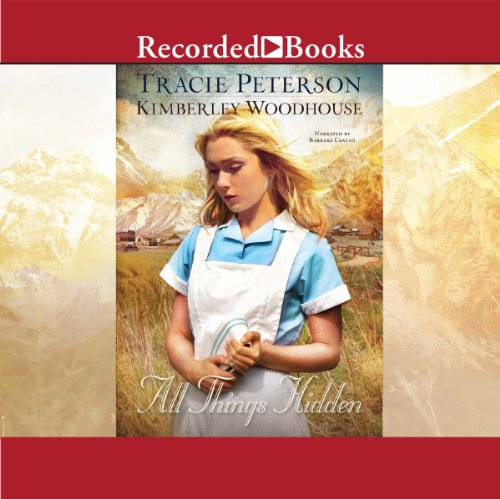 Gwyn Hillerman acts as a nurse at her father's medical practice in 1935 rural Alaska. Her family life has been rough ever since her mother, hating Alaska, took Gwyn's younger sister back to Chicago to live. Dr. Jeremiah Vaughan finds his life suddenly turned upside down when his medical license is stripped away after he loses an affluent patient. In a snowball effect, he then loses his engagement to Gwyn's sister, Sophia. When the government decides to send a group of families to Alaska in hopes of making a better life, Dr. Hillerman sends a letter urging Jeremiah to join his practice. Thinking his secret would be safe in the isolated Alaska Territory, Jeremiah agrees. Gwyn and Jeremiah soon recognize a growing attraction to each other. But when another suitor enters the scene and Jeremiah's secret is revealed, their hopes for a future are threatened.

What listeners say about All Things Hidden

I loved everything about this book, even though I live in Australia, I felt like I was in the territory of Alaska. The characters were totally lovable, yet totally human. I was sad when this story ended. Highly recommend.

Too bad I could not give this book 10 Star S! It was awesome and I did no want it to end.

I enjoyed the story line, in parts it seemed unlikely but it was entertaining. I do recommend changing the cover picture. The book stressed over and over Gwyn's curly hair. The cover picture is important to this reader since I look at it over and over while listening to the book.
Thank you Tracie and Kimberly for providing such good spiritual counsel through out this book.

Seems Okay, Just Not My Fav

I can't seem to stay focused on this story. It just isn't holding my attention. The story line seems a little trite in spots. A character has a secret and is vacillating between hide or reveal. Meanwhile a sinister character will probably find out and threaten to tell. I listen for a while then need to turn it off. I have been turning on and off for more than a month and am just half through. It probably gets better, but I don't think that I will finish it.

Would you listen to All Things Hidden again? Why?

Absolutely! There were a lot of different story elements going on but not so many to cause confusion. The author does a great job of tying the the different parts together.

What was one of the most memorable moments of All Things Hidden?

There was an emotionally raw scene towards the end that brought me to tears. I was surprised by this unexpected twist and felt like I was experiencing the tragedy along with the characters.

Which character – as performed by Barbara Caruso – was your favorite?

Hard to say. This narrator did an exceptional job with each of the characters. She was sometimes a little "sing-songy" but overall, I thoroughly enjoyed listening to this book because of her performance.

This story might be classified as historical fiction because of the place and time period, however, there is no real history threaded through the story. This in no way diminishes the quality of the story but readers shouldn't expect to be "transported in time".