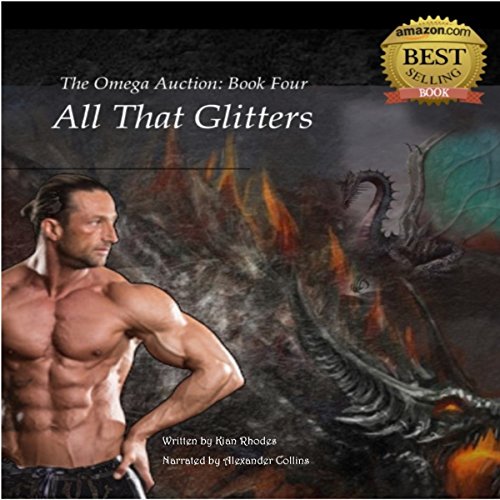 So, this is book four of this series. I have enjoyed each story of how the Omegas that were auctioned found their happiness. This one was a little hard to listen to. Not because it was bad or anything. It was just heartbreaking at how unloved Cian (sp?) felt and how naive and dense he seemed to be about things. Also, after having read this series, even though it is in an omegaverse kind of setting, I was struck at how weak and vulnerable the author made each of these characters, with the exception of Colby in book 2 who was bad ass. I love the friendship that all the Omegas seemed to have and Trevor's role. I just wish the Omegas weren't written with such downtrodden personalities. Having said that, I have found each of these stories to be a joy to listen to. I wish book 5 was on Audible. It's okay that it is not since I will read it on Kindle.

Even though I read each of these books through the Romance Package, I will still purchase them since a portion of all the proceeds is going to the Trevor Project.

I like that the narrator had a different voice for all the characters. He was awesome

I love this series. What Trey does for him brought tears to my eyes. Off to the next book!

it is so good

This is a very moving story that touches on depression and involves favourite characters from previous books. Kian has laid this out beautifully and Alexander Collins has portrayed each character perfectly and it's a pleasure to listen to his voice. I am excitedly waiting for the next book.

More shenanigans at the omega auction, but this time there are dragons!

All of the packs have kind of melded together. They are all so deeply involved in each others lives thanks to the auction they might as well be one giant pack.

Cyan, a dragon omega is purchased by Trey, a dragon who seems more concerned with growing the dragon population than an actual relationship. But when Cyan begins to waste a way due to his alpha's neglect and the abuse from his caregiver, Trey quickly learns that he cannot deny his feelings and does everything in his power to heal Cyan and win his heart.

Another good edition to the series.

My least favorite of the series

This book leaves a lot wanting. Not only are there huge plot holes which leave you wondering what's going on, but it is also difficult to believe the two main characters are in love. I felt more passion between Cien and Doc when he was examining an injury then in the rest of the book. I would skip this book if you are pressed for time and read it as an aside when you have nothing else better to do.

This story starts out different than the others in the series so far. At first I wasn't sure about how my feelings for Trey. He seemed to be distant and uncaring. And for an alpha he seemed to really unaware of what was going on under his own roof. But in the story you get to seem him grow up a bit and evolve as a character. I became more invested in the story and the characters after he seeks counsel for Cian. There is much to overcome and I think Trey's daughter is really a little show stealer.

Good ending to a horrible start for this Omega.

I was worried this Omega wouldn't have a nice ending. The trials seemed so real even for reality today. We can get so caught up like Alpha Tray and forget our words do have meaning.

I love that the gang from the previous books are part of the story.

Good, but not great

I don't know what I was expecting. I was hoping that the differences between dragon shifters and wolf/werewolf shifters would be more pronounced. I wanted more explanation of how a life bond would happen between dragons. The process is well developed for the wolf/werewolf shifters, but it seems to be glossed over in this story. A good idea for a story, with some interesting plot elements, but it seemed like it was missing some things for me.

After 4 books I’ve gotten kinda used to the narrator, but the cadence while he reads drove me crazy for the first 2 or 3 books.
But I hung in there till book 4 🎉 yay!

I loved reading this book so thought I’d enjoy the audio version, how wrong was I.
The narrator sounded like a robot with no expression or feeling in his voice. I had to stop listening after about an hour.