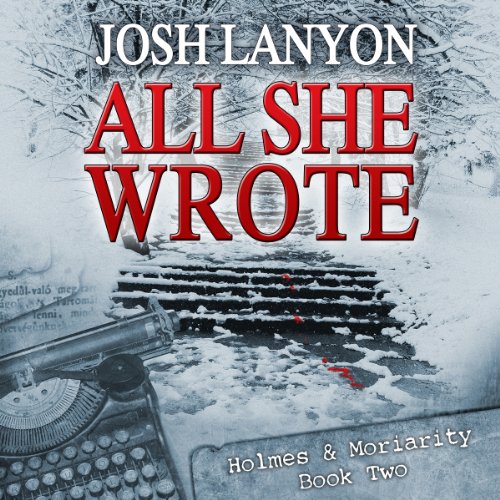 A murderous fall down icy stairs is nearly the death of Anna Hitchcock, the much-beloved "American Agatha Christie" and Christopher Holmes' former mentor. Anna's plea for him to host her annual winter writing retreat touches all Kit's sore spots - traveling, teaching writing classes, and separation from his new lover, J. X. Moriarity. For J. X., Kit's cancellation of yet another romantic weekend is the death knell of a relationship that has been limping along for months. But that's just as well, right? Kit isn't ready for anything serious and besides, Kit owes Anna far too much to refuse.

Faster than you can say "Miss Marple wears boxer shorts", Kit is snooping around Anna's elegant, snowbound mansion in the Berkshires for clues as to who's trying to kill her. A tough task with six amateur sleuths underfoot. Six budding writers with a tangled web of dark undercurrents running among them. Slowly, Kit gets the uneasy feeling that the secret may lie between the pages of someone's fictional past. Unfortunately, a clever killer is one step ahead. And it may be too late for J. X. to ride to the rescue.

Warning: Contains one irascible, 40-year-old mystery writer who desperately needs to get laid, one exasperated 30-something ex-cop only too happy to oblige, an isolated country manor that needs the thermostat cranked up, various assorted aspiring and perspiring authors, and a merciless killer who may have read one too many mystery novels.

Josh Lanyon does it again!!

Where does All She Wrote rank among all the audiobooks you’ve listened to so far?

I would say that it's in my "Top 5" list of audiobooks I've listened to.

What other book might you compare All She Wrote to and why?

I don't think I could compare it to other books because this differs too much from everything else I listen to. I would only be able to compare it to another Josh Lanyon book but that wouldn't work out well either since they're all so different.

There are a lot of good scenes so it's hard to choose from. I would say one of my favorite scenes is when Christopher was in the hospital and the doctor asks if Christopher is allergic to any medicines and he says "I'm allergic to cantaloupe.........and probably honeydew too." The randomness of that statement made me laugh.

I absolutely will next time.

I'm eagerly waiting for "The Boy With the Painful Tattoo" to be released because this series has me hooked!!

Oh, yes! I would recommend this book to anyone who enjoys a really good mystery. Kit, the leading character is witty, with a self-deprecating sort of humor which brings lots of fun to the story. His friend and lover, J.X., is really really cool, as well as smart, kind, and so patient.

The narration is simply perfection, Kevin R. Free has the exact voice i've imagined for Kit, as well as for J.X., and that's not an easy feat. He manages to bring to life all the different voices and nuances, adding a new dimension to an already pretty perfect book.

The mystery, the humor, and getting to spend more time with Kit and J.X. (always such a treat!)

One of my favorite scenes is the one where Kit discovers something new about himself with J.X.'s help. Kit needs to trust someone again, and here he understands, i think, that he can at least begin to.

If you could take any character from All She Wrote out to dinner, who would it be and why?

J.X. and Kit. I'd like to get to know J.X. better, and i'm sure that Kit's input will be quite entertaining.

Would you consider the audio edition of All She Wrote to be better than the print version?

I have not read the print but I really enjoyed the audio.

Really great characters who were engaging and dynamic.

What does Kevin R. Free bring to the story that you wouldn’t experience if you just read the book?

He is a good narrator but some characters were a touch inconstant in the voicing.

If you could take any character from All She Wrote out to dinner, who would it be and why?

JX Moriarity, I have a bit of a crush!

Another great story that kept me guessing the whole time. I really did not know who to suspect!! Great story telling and a really well done puzzle. The end felt a little lackluster but overall the story really flowed.

Holmes is once again dealing with a need to change his writing and relationship. He is dragging his feet in the love department and needs to get over a few things before he can really commit. In his career he really needs to get with it and step out of his literary comfort zone. So, he jumps at the excuse to visit his old mentor and help her with a writing workshop after she has a terrible accident.

Cue the drama and murder plots!! There are so many curves and twist in this tale it is hard to decide who is the best suspect or if there is a plot at all. There seriously are moments when I thought maybe these people just have super bad luck! In the end I would have liked more justice but I understand why it turned out the way it did.

The romance takes a steamier and more detailed turn. I was ok with the MM action, even though it ramped up a bit from the last book. It all made sense and was important to the dynamic of the couple. It was really well done and not at all uncomfortable. I really love Kit and JX as a couple, their varied personalities really compliment each other.

I am now super excited for the next book but having trouble finding a clear release date!! Please let it be soon!!

Where does All She Wrote rank among all the audiobooks you’ve listened to so far?

This is a traditional murder mystery inhabited by many of the usual suspects. It contains likable characters and provides gossipy insights into the publishing world. The protagonist's insecurities are endearing if overdone, and his boyfriend (an ex-cop) is too dishy and too tender to be true. I was slightly embarrassed to learn more about the mechanics of gay sex than I was ready to know -- but then, I am an older woman raised in an age more given to implication than to description. Nothing offensive here, though -- in fact, it's downright sentimental. The mystery is satisfying, and justice is done, though in secret. The narration is smooth and well paced, fitting the characters well.

Poor J.X. Has his work cut out for him with Chris!

I was so baffled by this mystery and with all the guessing Chris did about who the likely culprit was, I was completely caught off guard when that, ah-ha moment hit!

I loved how this story ended and thank goodness J.X. Has some sense! LOL

Every book in this series sweeps you away!

You feel like you're right there - in the snowy garden of Ana Hitchcock's home or in one of her rooms. Every scene feels so real, with the dialogue flowing so organically, the plot unfolding so intriguingly, and the characters all so dynamic! The narrator is the perfect pick for how I picture Christopher - as sort of a forty-something Andrew Rannels :p

Love This Series, Kevin R. Free is Perfect for Kit

What a great sequel, I love the way the author develops the relationship between Kit and J.X., I could really see a shift in both of them from Somebody Killed His Editor. J.X. was always a little alpha, but the way he interacts with Kit as you see how much J.X. wants a relationship is really well done. Kit grows so much in both of these books, it's fascinating to watch.

I listened to this as an audio book, Kevin R. Free is the narrator. Free did such a great job with all the characters and it was fun to listen to him change the voices whilst narrating through Kit's POV. He does a great J.X. - so sexy.

Excellent ending. Already downloaded The Boy with the Painful Tattoo and since Free is the narrator for this book also, I can hardly wait to listen to it.

The book opens with Kit and JX having a fight about their telationship, all Kit's fault. Kit flies to New York to help at a workshop being run at old friend Anna's estate. She tells him someone is trying to kill her. Soon one person is dead (Nella), then a second death occurs. The plot becomes twisty, our heroes unravel it in the end though there is no proof.

I just love Josh Lanyon's books and this wasn't a disappointment. As always she delivers an amazing mystery. I did not guess who dunnit till the very last death. of course, getting to know more about Kit and JX was wonderful too. Some vulnerable times, some hot times, and everything in between--what a fun read! I wish there was an audiobook to all Josh Lanyon's books so I can switch back and forth. I don't want to put a story down even for the time it takes to drive to work. On to the next!

Josh Lanyon has taken great care in selecting the narrators for his audiobooks, and it shows. Kevin R Free's performance is worthy of the good material he has to work with; he excels in using different voices for each character without going over the top, so that it is easy to tell who is speaking even without dialogue tags. And the dialogue is wonderful. I'd forgotten how funny this book is, with Kit's rather sarcastic inner commentary as well as his quick ripostes and the amusing insights into how writers work. The book starts with Kit seizing an opportunity to avoid a weekend with J.X., his new lover, because of his insecurities both about his desirability and J.X.'s success as a writer. He answers a plea for help from his injured former mentor, who asks him to stand in for her at her writers' seminar at her country estate in the Berkshires - oh, and to find out who is trying to kill her. There is equal pleasure in following Kit's navigation through the characters and motivations of the possible suspects and in watching his relationship with J.X. develop.

It isn't essential that you listen to the first Holmes and Moriarity (Somebody Killed His Editor) but it enhances the experience if you do and you wouldn't want to miss it anyway! The third book, The Boy With the Painful Tattoo, is due late 2013.