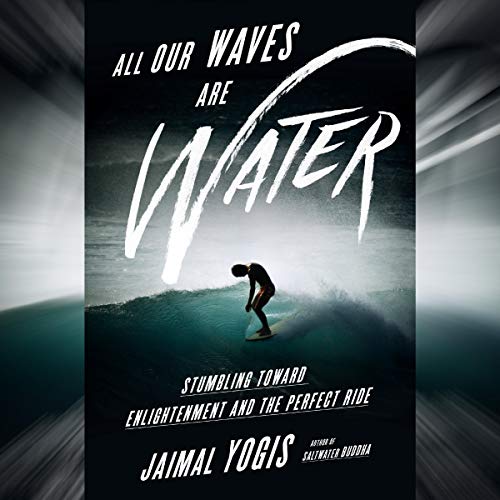 All Our Waves Are Water: Stumbling Toward Enlightenment and the Perfect Ride

In this meditative memoir - a compelling fusion of Barbarian Days and the journals of Thomas Merton - the author of Saltwater Buddha reflects on his "failing toward enlightenment," his continued search to find meaning and a greater understanding of grace in the world’s oceans as well as everyday life.

Born to a family of seekers, Jaimal Yogis left home at 16 to surf in Hawaii and join a monastery - an adventure he chronicled in Saltwater Buddha. Now, in his early 20s, his heart is broken and he’s lost his way. Hitting the road again, he lands in a monastery in Dharamsala, where he meets Sonam, a displaced Tibetan.

To help his friend, Jaimal makes a cockamamie attempt to reunite him with his family in Tibet by way of America. Though he does not succeed, witnessing Sonam’s spirit in the face of failure offers Jaimal a deeper understanding of faith. When the two friends part, he cannot fathom the unlikely circumstances that will reunite them.

All Our Waves Are Water follows Jaimal’s trek from the Himalayas to Indonesia; to a Franciscan Friary in New York City to the dusty streets of Jerusalem; and finally to San Francisco’s Ocean Beach. Along his journey, Jaimal prays and surfs; mourning a lost love and seeking something that keeps eluding him.

What listeners say about All Our Waves Are Water: Stumbling Toward Enlightenment and the Perfect Ride