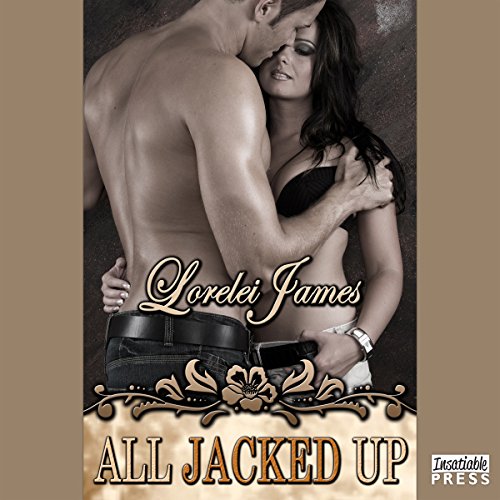 Keely McKay knows Jack - and Jack Donohue is a certified pain in her Wranglers. Keely needs another man giving her orders like she needs a hole in her boot. What she does need is a restoration specialist so she can open her physical therapy clinic. His price? Act the part of his loving fiancée. Their sizzling lust makes it all too easy to go from butting heads to knocking boots - but outside the bedroom they're as mismatched as ever. Now Jack and Keely must face the fact they're not fooling anyone but themselves - or risk losing the real deal.

What listeners say about All Jacked Up

I loved this story and the narrators did a fanatastic job of bringing the characters to life.

One of the best in the series

Keely called Jack on his bullshit. It was fantastic timing and caught me completely off-guard because I had wanted Jack to succeed at his plan. Turns out, Keely is right, he doesn't deserve to get what he wants and doesn't deserve her. Loved the twists in this book.

Least favorite of series so far

There was a part of the story where Jack was trying to win a contract to restore an historical building in Utah. He lost the bid over "moral issues". Ultimately this ends up causing a huge fight between Keely and Jack. This seemed like a real ploy in the storyline and just didn't work for me. Also the scene towards the end when Keely's 5 brothers bring Jack to her at a campsite and then her father shows up.........I don't know. I wish LJ would have written some better material in these scenes (and a few others as well).

This just felt like a rough draft to me. I would give it a very thorough edit and rewrite in some crucial areas. Keely's character was fairly well developed, but Jack's character still needed some fleshing out.

Would you be willing to try another one of Rebecca Estrella’s performances?

Rebecca Estrella is one of the WORST narrators in the audiobook market. The only reason why I am hanging in there with the Rough Riders series is because I love the characters. Otherwise, she is pure torture.

I'm not a big fan of romances that have a lot of conflict in them to the point where the couple is constantly fighting and making up (or having "angry sex", etc.). While some conflict is necessary to put some tension and reality into a romance novel, a story like All Jacked Up had a little too much conflict in it for my taste.

The McKay family is getting so big. It would be nice if one of the future books would have a prologue or something that named all the couples and their kids (or maybe LJ could put a McKay/West family tree on her website). It's very frustrating not remembering all the kids' names. I'd have to go back and start over with book #1 and read them all again in order to make my own family tree. Not sure I'd be able to stand listening to Rebecca Estrella all over again for that project.

I cannot stand listening to the narrator. I could not finish the story because of her voice. I read all The Black Top series and loved them.

Keely is my favorite female character in this series. She’s tough snd soft at the same time. I live how she doesn’t give in to everything and stands up for herself.
Jack can be a total butt, and be a great guy too. It’s worth the time to watch them unfold. Great book!

great book. Jack and Keely start a fake engagement but fall in love for real. lots if twists and turns.
Nararating would have been better if it had been a woman and man doing it together

I really enjoyed this story and always love Lorelei James books but listening to Rebecca Estrella isn’t easy. Perhaps I love Scarlet Chase and am making an unfair comparison but hope Ms Estrella will get better the more she narrates. Lorelei James’ words deserve the best!

couldn't stop listening to this book. love her writing.... descriptive details. can't get enough of these amazing books

Keeley and Jack hated each other because of past problems. Jack needs to be married to get a rebuilding job he really wants. After bumping into Keely he talks her into posing as his fiancee so he can get the job. They move in together and everything heats up. They both suffer doubts and have trust issues. The end of the story is funny and heart achingly sweet.

I listen to a lot of audio books. I love the premise but I'm not feeling the chemistry between the 2 main characters. For a story like this to work I need the characters to have lots of sexual tension. I'm about halfway through and I don't care one way or another what happens to the characters or the plot. This rarely happens.