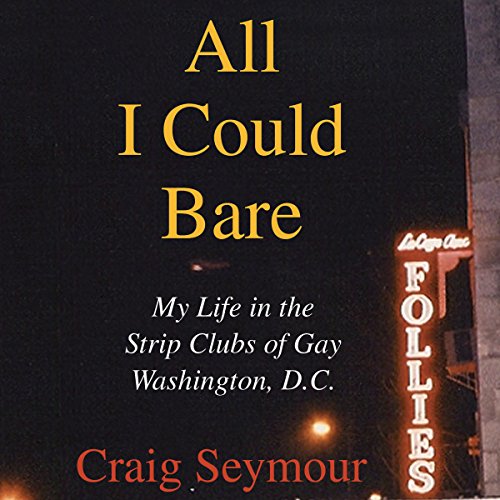 All I Could Bare

A frank, funny, and inspiring memoir about how stripping helped a college professor discover his true self.

I felt that I'd made a transformation as surely as Superman slipping out of a phone booth or Wonder Woman doing a sunburst spin. I was bare-ass in a room of paying strangers: a stripper. After years of wondering what it would be like, I had done it - faced a fear, defied expectation, embraced a taboo self. It was only the beginning....

All I Could Bare is the story of a mild-mannered graduate student who "took the road less clothed". Seymour embarked on his journey in the 1990s, when Washington, D.C.'s gay club scene was notoriously no-holds-barred, all the while trying to keep his newfound vocation a secret from his parents and maintain a relationship with his boyfriend, Seth. Along the way he met some unforgettable characters - the 50-year-old divorcé who's obsessed with a 21-year-old dancer, the celebrated drag diva who hailed from a small town in rural Virginia, and the many straight guys who were "gay for pay". Seymour gives us both the highs (money, adoration, camaraderie) and the lows (an ill-fated attempt at prostitution, a humiliating porn audition).

Ultimately coming clean about his secret identity, Seymour breaks through taboos and makes his way from booty-baring stripper to PhD-bearing academic, taking a detour into celebrity journalism and memorably crossing paths with Janet Jackson, Mariah Carey, and Mary J. Blige along the way. Hilarious, insightful, and touching, All I Could Bare proves that sometimes the "wrong decision" can lead to the right place.

What listeners say about All I Could Bare

Definitely a niche book but if you’re a gay guy who can relate to this lifestyle this is gold. I usually avoid gay stories as they’re usually woke, which means unrealistic and boring but this is set in a time thankfully before that when things were still real and people weren’t afraid to say it.

A well written, and entertaining book. Craig's voice really made the book come to life.

Sexy, funny, and moving. And it's great to hear it in the writer's own voice.

What made the experience of listening to All I Could Bare the most enjoyable?

Craig did a great job narrating this book. Bought this book on whim, and glad I did.

It made me laugh several times, it also had a upbeat tone, so there was no sadness.
It gave me good perspective on life. Don't live in fear, and if you want to do something try it.

At times hilarious and at times heartbreaking, this was a "read" that was totally worth it!

Where should I start? I loved this story!

Such a great ride with the narrator! Very good performance by Craig! I was so amazed by this! Thank you.

If you could sum up All I Could Bare in three words, what would they be?

Narcissism to the hilt.

Seth. The only character in the story that had his feet on the ground.

No. Listened in the car. Small doses were better.

Amazing listening to someone who actually thinks nothing of taking advantage of others to reach thier own goals while expecting thier attention, admiration and positive reinforcement. It was a real insight into the mindset of such people and their relentless climb to emptyness. I felt empathy for most of the people in the story. Craig seemed to have less perception of the direction to happieness at the end than he did in the beginnig of the book. I kept listening with the hope for the start of a "happily ever after" story.On the lighter side, it brought back memories of the times I had been to The Follies and it was fun to get a back of the house perception.