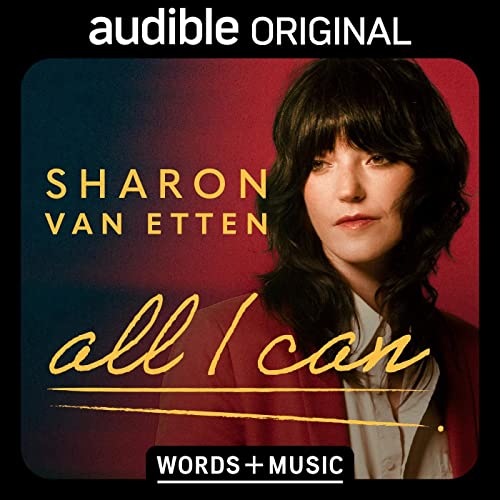 Sharon Van Etten is a songwriter, musician, performer, and actress. Impressive sure, but that’s not why fans crowded the merch table she manned at her early gigs, hoping to share a word. In All I Can, recorded exclusively for Audible’s Words + Music series, Van Etten muses on the emotional power of music and along the way demonstrates the truism of the personal illustrating the universal. Her research in the affairs of the heart was hard-won, her catharsis earned; her recordings are a master class on emotional survival.

Van Etten takes us through her early struggles and her fascination and focus on how music connects with us so deeply. Her charmingly modest account of a career that has blossomed well beyond her indie rock roots and into acting and collaborations with likeminded creatives like David Lynch, Jeff Goldblum, and Norah Jones is enlivened by performances of several of her best-known songs, including "Stay", "Seventeen", "Like I Used To", and "I Love You but I’m Lost".

What listeners say about All I Can

This floor to the ground

I loved hearing about Sharon’s journey as a musician. She’s so inspiring and feels like a friend right away! She pulls you close and shows so much courage. It helps us all to shine brighter and to risk vulnerability. So lovely and true!

Since I discovered Sharon VanEtton through her performance of Tarifa on Twin Peaks in 2017, she has become one of my favorite artists. I knew precious little of her career or personal life, I simply had feelings from the characters & stories projected through her songs.

She tells her own story so well that I don't want to summarize it or give anything away. I'll just say that i was moved, entertained & inspired. I have already recommended this personally to several friends. This is a great listen for musicians (or artists of any kind), but it is also a bold & intimate tale of survival and success.

This is such a moving story. I was already a fan of Sharon Van Etten but now I’m a super fan. I got chills in the best way from beginning to end.

This mini memoir is what you want to hear at the airport or in the car on a rainy day. Let he world go by, and drop into hers.

A sweet and sometimes haunting story made intimate, accessible, and empowering, because at no point is she the victim.

She is constantly exploring the light and dark pieces of her serendipitous and tumultuous life instead of backing away…and in turn urges you to do the same. Finding herself touring in England when she just wanted to visit a friend? Covered. Recovering from wild relationship manipulation? Check.

The story is told in her voice, and that to me was a swoon factor, because this story isn’t just read; it’s told. To know the inner life and the stories behind Van Etten’s songs is to love her even more.

I feel sorry for her, but not in a good way

This is the memoir so far of a girl who has embraced her victimhood in compares everything in her life to being a victim.

While Sharon has had success in her career she has not been a leader but a follower. In this book she describes many ways she has moved forward by holding on to the coattails of others. Success comes in many flavors, but whatever you choose you have to live with.

I struggled to finish this book and would not listen to it a second time.

This is a heartbreakingly beautiful hour and a half. Listening to it is like finding a calm in a storm, and then, somehow, the storm is gone.

Experiencing the beauty of the universal alignment showing me precisely what I needed to hear.

The best. Raw honesty and vulnerability from one of the greatest songwriters of our time

What an incredible piece of programming. The vivid details in which she is so generous to share of her life story is contextualized by her music performances (of which the production quality is dazzling). This is a must for any fan of Sharon’s music and artistry, and most definitely a gateway for those who are uninitiated. This is easily the best audio program I’ve heard on the Audible platform.

Short and sweet, I found this to be authentic and "felt" the artistic expression throughout the listen.

I am a big fan of music, particularly the 90's Alt. I hadn't been exposed to Sharon's work until Audible recommended it. Honestly while I enjoyed the music it was more the story and presentation that sold me on this as time well spent.

An out pouring of words and emotions

An outpouring through music and words. A cathartic experience. It cracked me up and healed tiny parts of me. Thank you Sharon 🙏🏻

Get some tissues, a glass of whisky and her LPs

I already had tons of admiration for this woman. Today I got to know her a bit more. I was driving whilst she told me her life story. A couple of times I had to ask her to repeat herself because i couldn't quite catch my breath. I wished i didn't stop smoking years ago, because i really needed a drag. My drive was a rollercoaster, imagine her story!