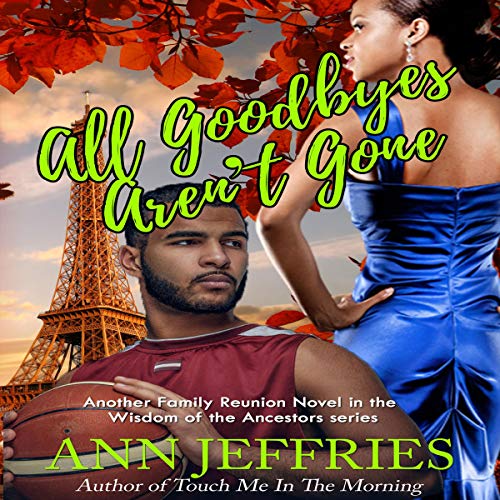 All Goodbyes Aren't Gone: Family Reunion - The Wisdom of the Ancestors

Gregory Clayton Alexander, tagged "Alexander the Great" by the sports and news media, has announced his retirement from professional basketball at age 29. No one, except his family, understands why he wants to quit while at the top of his superlative career. Still, he's been playing the game for more than half his life. After winning Olympic Gold twice, three NBA championship rings, and seven years playing more than eighty professional games a season, he's ready to trade his NBA highlights to begin using the MBA he worked to achieve. He and his friends have formed Compliant Trading and Investment, a Wall Street brokerage house, banking institution, and member of the New York stock exchange. Yet, though highly successful, he has no one special in his life.

Angelique Teresa Menendez-Gaza is the toast of the beauty and fashion industries and has enjoyed an active acting career in film as much as she has her demanding modeling career. At nearly 21 years of age, she's ready to take on a different challenge and open Angelique's Place, an upscale restaurant and The Run Way, an exclusive night club in the heart of New York City, one of the toughest markets for new eateries and clubs. She spent several years between modeling and acting gigs studying at Le Cordon Bleu in Paris, France, perfecting her new craft. Now she has the financial resources and is making the time to share her passion for cooking with the world just as she did her acting and modeling careers.

Gregory and Angelique are long-time platonic friends. She has long been in love with him, but, for Gregory, the age difference between them always stood in the way. That is, until he accidently discovers her life and safety are at risk. He puts everything on the line to protect her and risks losing his heart to her in the process. Angelique is the little sister of his heart; but could she also be the woman of his dreams. They must survive this threat to explore the potential for a future to

What listeners say about All Goodbyes Aren't Gone: Family Reunion - The Wisdom of the Ancestors

The least liked by Miss Jeffries

Well I like was that Miss Jeffries keep all of her stories intertwined with each other. It’s like the last book you read continues to go on because they are always included somehow in the current book. I did not like the storyline it went nowhere. Other than in circles. It gave no closure. So you don’t know what is really going to happen to the couple.