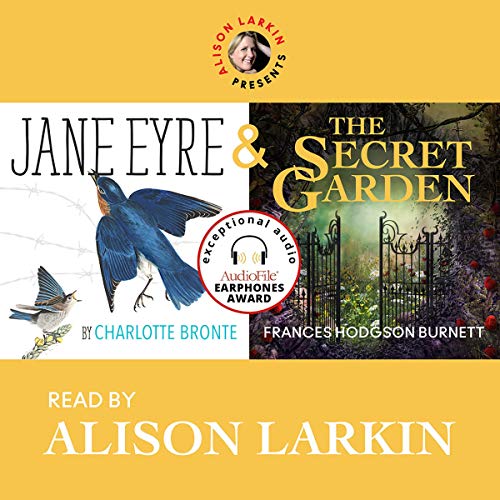 “Listeners will be riveted.” (AudioFile Magazine)

Alison Larkin’s Earphones Award-winning recordings of Jane Eyre and The Secret Garden are brought together in this powerful double bill.

Jane Eyre by Charlotte Bronte is the epic love story of the plain, unwanted orphan with an indomitable spirit who becomes a great romantic heroine despite all odds.

The Secret Garden by Frances Hodgson Burnett is the story of Mary Lennox, who, when her parents die of cholera, is sent to live with her uncle in a cold, dark mansion in England. There, she discovers a secret garden that has been locked for 10 years.

“As an orphan myself, these two great novels affected me deeply as a child. Narrating them as an adult was a privilege and showed me that the courage it takes for an unwanted girl to forge her own path in the world is the same today as it was when these two masterpieces were written...” (Alison Larkin)

What listeners say about Alison Larkin Presents: Jane Eyre and The Secret Garden

Take two great classics and add a A List narrator at the top of her game and you have an audio experience like none other. Both these audiobooks won AudioFile Earphones awards and it is easy to see why. Alison Larkin's narration is utterly compelling - she reads so well you feel these books are contemporary and they are soooo easy to liste to despite the fact that they are both classics! Jane Eyre has always been one of those books that haunted me - I had not realized how funny it is too - and The Secret Garden is powerful in a different way. What a way to spend a long car journey during the pandemic. Listening to two great classic masterfully read. I found The Secret Garden to be particularly inspiring at this time as it shows how connecting to nature and the people around you can help with loneliness and isolation. In a word, WOW!