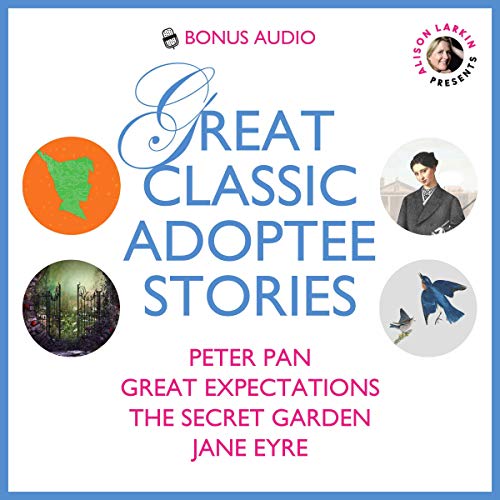 At the heart of each of these great classic stories is an adoptee with an indomitable spirit who becomes the heroine (or hero) of her own life. "The bravery it takes for an unwanted orphan to forge their own path in life was as great when these stories were written as it is today," says narrator Alison Larkin, who draws on her own adoption experience to bring these stories to authentic new life. Exclusively for Audible, by special request, the stories are followed by The English American, Alison Larkin's best-selling autobiographical novel about an adopted English woman who finds her birth parents in the United States.

"The well-known characters in the much-loved story of Peter Pan are enlivened with humor and excitement in this gem." (AudioFile Mag, Earphones award winner)

It's the same thrilling story of mysterious beginnings, poverty, an old woman jilted at the altar, a beautiful, haughty young woman and a mysterious financial gift that transforms the life of a young person. Only in Larkin’s critically acclaimed adaptation, Pip is a woman.

Best Audiobook of the Year

When her parents die from cholera in India, orphan Mary Lennox is sent to live with her uncle in a cold, dark mansion in England. Then she discovers a secret garden that has been locked since her aunt died 10 years earlier....

After being subjected to cruelty in her foster home and at boarding school, Jane becomes a governess in the home of the mysterious, sarcastic, and deadly attractive Mr. Rochester who harbors a terrible secret....

Alison Larkin’s best-selling autobiographical novel tells the story of an adopted English woman who finds her birth parents and true love in the United States.

A Vogue Most Powerful Book of the Season

I bought this set in part to heat Great Expectations. But the narrator has changed the story to make the protagonist into a female, which completely destroys the plot of the book and renders it ridiculous. What early nineteenth century girl, for example, is expected to become an apprentice blacksmith? In modern times perhaps, but Dickens would be rolling in his grave. Appalling.

A wonderful audiobook for adopted children!

For any adoptive parent looking to inspire their children with a high quality audiobook of great classics, this is an absolutely delicious find. Read by award-winning narrator Alison Larkin each of these classics shows an adopted person at the centre of the story, triumphing over obstacles and winning in the end. I grew up on these stories and even though I am an adoptive parent, until now I had never realized that they were very much about adoption! But of course they are! They have adopted heroes or heroines! Pip in Great Expectations and Estella - why there is an adoption story throughout that great classic! Also Mary Lenox in The Secret Garden loses both her parents right at the start of the book and of course poor Jane Eyre whose parents are both dead is treated appallingly as a child, only to find a way to live authentically and find love in the end. At the end of Peter Pan I was struck by all the adoption connections - so interesting and what a how moving it is at the end. The book is different and in many ways better than the play or the films. As for The English American - what a treat that was at the end. 67 hours of adoption stories in one audiobook? WHAT a gift!