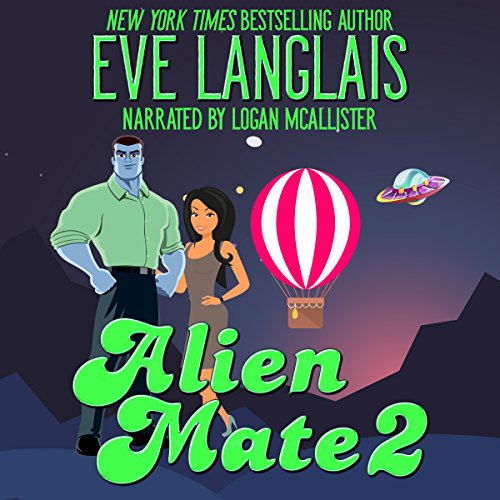 Lex's ancestors have chosen a mate for him, there's only one problem. She's not the earthling he wants.

Maya's been raised to believe in extra-terrestrials and when she saves ones from drowning, she can't resist taking him home - and into her bed. When this curvy Latina learns of his mission to collect his mate, she decides to help him even as she wishes she could be the chosen one.

Lex's mission to collect his mate has been fraught with difficulties and to add even more trouble to the mix, he finds himself attracted to the wrong earthling.

Things get complicated in New Mexico for the military's on the hunt for an ET, Maya's determined to do what's right, and Lex finds himself in the biggest battle of all - the one between his heart and his honor.

What listeners say about Alien Mate 2

Another really good story. Narrator not so much

This is another story that I thought was sweet and I really liked it. The author is a great writer. I have many of her other books. On this one the narrator got a little better than book one but I would have preferred another narrator.

The series just keeps getting better

I looked book one well enough, but book two was way better. I can't wait for book three because I'm sure it's going to rock

This was a short listen but really good the plot and the characters were very likeable.
highly recommended for a light day

I have to say that listening to this book really brings home the advantages of audible. My review rating has risen one whole star.
A good narration with the accents and inflections. Loved Maya and Lex and their interactions.
Still find the story upsetting about the previous visitor being dissected and killed.
BOOK REVIEW
3.5 stars. Really enjoyed this short fun story and liked both Lex and Maya. Didn’t have enough fun with Alphie this time. Not as good as book one as we stay on earth.
Liked the thinking of getting them to choose each other but it was a bit of a risk using Amanda as the fake betrothed.
Hated the fact another alien who had previously come to claim his mate had been captured and killed by the military arses. Cannot understand the Oracle and ancestors letting that happen and the poor woman who was his mate is now left alone on earth.
I own the original version which has been read and reviewed previously but they are missing.

I love this series! Omg it so freakin funny. The setting in this one is in New Mexico. I love it, living in New Mexico myself it’s great knowing the places mentioned in this book. I am a bit disappointed that I didn’t run into a blue alien when I was in Alamogordo. The narrator, Logan, did a fantastic job. This is a short read, a tad shorter than the others, however still packed full of awesomeness. Alfie cracked me up. I love how everything worked out in the end as it was supposed to, even if the oracle is a tricky gal. Great read, great narration. Grab this,the first, and third and enjoy.

I love this series and the story but the narrator needs to be changed. I hope that the girl who lost her man gets another chance of finding love with another blue guy.

We met the Oracle back in book one, Alien Mate, and she seems to understand that in order for the aliens to find an earth woman and to claim them things need to change. While keeping that in mind we see Lex and Maya who have a stupid, crazy, strong connection to another fight the pull to be together because Lex is supposed to be 'destined' to be someone else's mate.

This book had a lot of angst only because Maya and Lex were fighting not to be together. Also it seems as though the US government or more specifically a general within the US Military, is up to naughty things. I really hope that Eve Langlais explores this angle because it seems as though this little tidbit that was given within the book should be explored.