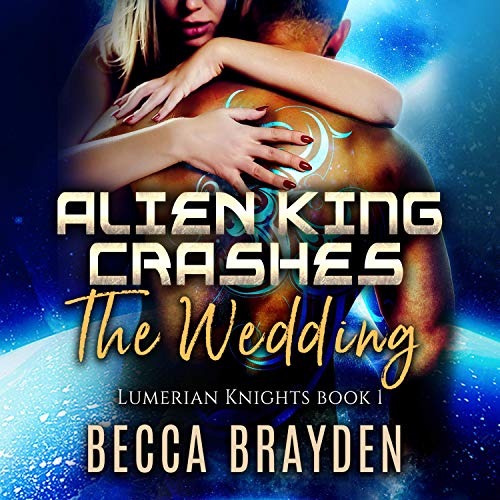 Art dealer Sasha Montgomery is both nervous and thrilled to be invited to the Caldorian Earth Base for her best friend’s wedding to an alien warrior. One, she’s never seen an alien up close, and two, she made a promise to be there, no matter how much the idea of being surrounded by hundreds of huge alien warriors frightened her.

She thinks she’s got it all under control, until Dagan, the groom’s best friend, crashes the wedding. He’s smoking hot - way too hot to be an alien - and determined to seduce her. Sasha gives in to passion with unexpected consequences. Ancient power rises in response to their newfound bond, and the once innocent Sasha discovers that Dagan has been keeping secrets. He’s not just another warrior, he’s a king, and the power rising between them hasn’t been seen in a millennium.

Sasha must learn to control the force clawing its way through her body...or destroy them all.

What listeners say about Alien King Crashes the Wedding

Narrator was awesome but ....

I know now why it got low reviews. I didn't like the neanderthal, "he man" attitude, the spankings as well as I thought it very crude he made her have sex with all his warriors watching! What decent person, or alien, would share his girlfriend while others watched!? Anyway, I skipped a lot just to get to the end and that wasn't even satisfying. Won't be reading the other 2 books.

A pie with no fill

This book is like waking up to smell a warm apple pie…just realized it’s a candle. It’s very generic storytelling of their main characters. Alpha male falls in love with weak and emotionally damaged female. Then there’s misunderstandings, and then there is stupidity. Like lady this dude is an alien ask detailed questions. At this point I’m thinking the author made the main female in her early 20s just so she can explain why she’s so freaking dumb.

Oh and the author kind of forgets their side characters throughout the story. Of course you’re going to remember her best friend but I cannot for the life of me remember her husband‘s name until I heard it again at the end of the book. This man is supposed to be the main male’s character’s best friend. It’s just that the side characters and their connections to the main characters is something i didn’t realize I look forward to as a reader.

For me when I listen to books I want to get lost in the story telling. I want to feel happinesses, sadness, embarrassment. Even if it’s second hand. InsteadI feel as though I was given a pie with no filling.

Oh and there’s unnecessary powers to move the plot for the next book you have been warned.

The Perfect Book!!! I love it!

If I could choose a book to be the leading lady in IRL it would be this one, hands down.

I'm so excited to see what comes next!! I'll have the next 2 books listened to by days end. I really hope that Teddy Hamilton does the fourth book as well!!! He is really great... I've never understood how he goes from a super deep voice to a believable female voice and back and forth. Well, I really hope that 5 and 6 and many more are on there way! 😁

Anyway, like I said, If I could choose a book to be the leading lady in IRL it would be this one, hands down. I mean, besides the best sex ever and with a superbly dominate man... well, alien with a beautiful body (so a manly alien hehe) I would have the BEST LIFE EVER! I would be an Artist Queen with new DNA providing longer life to myself and my husband, THE KING, as well as the healing abilities and her ability to help the Lumerian Knights with their swords (or their markings maybe). I guess some people might call that winning. Yes, Queen Sasha was definitely winning! 😁💜

Sexy with good writing and story

I read the second book of the series before reading this one and I wish I read this first. This book was way better than the second one. Since it’s listed as erotica, I just thought it was all about sex with no actual storyline. But I was wrong. Yes, there are lots of sex, but there are some good story along with good foundation building of lumarian knights. This should be listed as erotica with good sci fy. Highly recommend.

*spolier* The lead female irritated me with her strange reactions from running from a kiss to not having a reaction to realising she had bound herself to a king of an alien race. She moved through emotions and personal growth and changes without the story offering any thought processes that helped the listener to make sense of sudden changes in personality

Alien King Crashes The Wedding by Becca Braydon and narrated by Teddy Hamilton was such a great listen! Use of your imagination in the telling of this book makes it that much more spectacular.

Enjoyed the book. Funny moments in my opinion and lots of steamy moments.. my kind of story.. will definitely read the next book..when ever I get credit . Loved it overall!!

I was entertained by the king and his queen. Their foreplay via banter is expertly written; I highly recommend this book. Thank you.

Found this rather addicting to be honest and finished it in 3days oops. Off to download the next in the series to see what else happens.

Only thing that would make it better would be duet narrative.

I loved this book ,science fiction, aliens,sex, have down powder the next two books in the series can't wait to listen to them😊

Author really missed out on writing some really good science fiction here
The story is good but could’ve been brilliant if only the characters had more depth of personality
The plot has potential to make a great story of galactic proportions with interesting plot twists if only some effort was put into fleshing out the surroundings of the character’s their culture how and why they came to earth in the first place where their from etc
i would like to see this book rewritten (including the steamy sex scenes) with much more details on the character’s,surroundings , alien culture and a greater explanation of how all the alien technology works
To the author you’ve not only written a very good sexy story but it needs to be taken to the next level now with the suggestions above and it would be mainstream sellable great