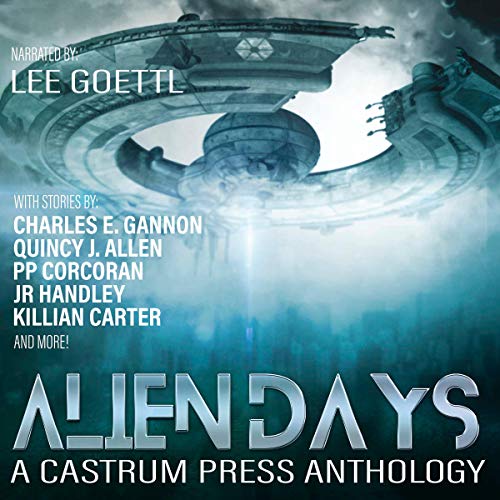 Alien Days is a multi-author anthology with thrilling tales of aliens, invasions, artificial intelligence, friendship, deceit, and extinction. A combination which makes this collection a must-listen for science fiction short story fans.

This anthology features Nebula and Dragon award nominees, Amazon best-sellers and award winners alongside rising stars in the science fiction genre. Let the authors take you on adventures through dystopian worlds and far flung planets that will stretch your imagination.

Charles is a three time Nebula and two times Dragon award nominee, an award winner and New York Times best-selling author of: The Ring of Fire Series and Starfire Series.

Killian is the Amazon best-selling author of: The Galactic Sentinel Series.

Quincy is a US best-selling author of: The Blood War Chronicles and The Four Horsemen Series.

Paul is the Amazon best-selling author of: The Saiph Series and The Four Horsemen Series

S.K. is the USA TODAY best-selling author of: The Cursed Lands

A little something for everybody

Just like all anthologies with different writers there's some stories that are well done and others that fall a little flat. It's a nice ay to try out authors you might not have heard of and possibly discover one that you love and want to hear more from.

I received this audiobook for free in exchange for my own honest personal review.

The truth is out there

A great set of alien based stories. Some are great and some are unique and suited to folks other than me. All were enjoyable and brought something unique to the anthology. Amongst my favorite was a wolf pack encountering an alien, one whose race is spread through the stars by their death on new worlds, some great invasion and battle stories. All told a well rounded anthology with something for everyone and some great twists on the basic, they come from beyond. I was voluntarily provided this free review copy audiobook by the author, narrator or publisher

Alien Days Anthology is a collection of varied and diverse science fiction stories that will make you pause to think.

With 22 different stories, you get a virtual buffet from different authors, ideas and expectations. There will be twists and unexpected turns to keep you thinking. Let your imagination run free.

I enjoyed listening to this collection. II found almost all of these stories to be well written, imaginative, and entertaining. Lee Goetti did an outstanding narration .

A Good Collection of Sci-Fi Tales

I requested this title from the "author" and agreed to review it.
I generally don't go for short story collections but thought I would give this a try.
Pros: You get exposure to many writers and their material; You get to shift from one alien setting to another; If you only have a short amount of reading time, you can still get through one of the stories.
Cons: A short story, by it's very nature can't spend the time developing characters and settings in the same way as it can be done in a book; Many of the stories leave you "hanging," although that is usually the author's intention.

Bottom line for me was that I wanted more and was sad when I reached the end.

There are some clever, fun stories in this anthology. While none of the blew me away, they were all entertaining, and I might go so far as to say a few were thought-provoking. They certainly made my drive to work easier.

Based on the topic and the high ratings, I began this audiobook with high expectations. I tried to finish it at least five times but found no stories that held my attention over the painfully monotone delivery of the narration, which sapped the stories of any drama or excitement. Perhaps I would have enjoyed this collection with a different narrator or if I had read it on my own. I received this audio book for free in exchange for an honest review.