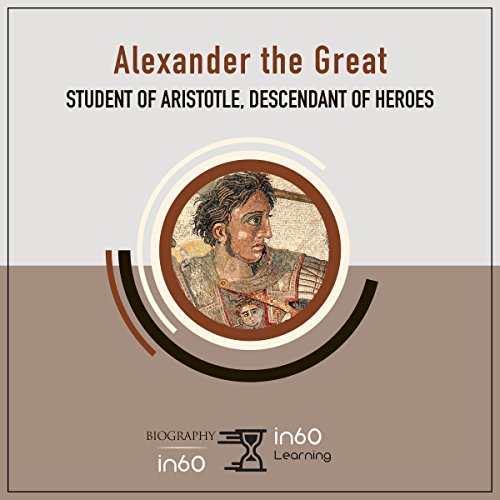 Alexander the Great: Student of Aristotle, Descendant of Heroes

Long before historians added "the Great" to his name, Alexander stated, "I would rather live a short life of glory than a long one of obscurity." He certainly lived up to this ambition, conquering most of the known world in just 13 years before his death at age 33. Though undefeated in his lifetime, Alexander died unsatisfied - he always wanted more. His ambitious personality comes as no surprise considering his upbringing: born to powerful parents, he studied under Aristotle and grew up believing himself a descendant of the Greek heroes Achilles and Heracles. His parents and tutors raised him to believe he had something to prove, and this audiobook serves as an account of what he accomplished.

What listeners say about Alexander the Great: Student of Aristotle, Descendant of Heroes

Would you listen to Alexander the Great: Student of Aristotle, Descendant of Heroes again? Why?

This is a unique way to be introduced to new subjects that you may have forgotten from school or never learned to begin with.It is quick and pain free.

What was one of the most memorable moments of Alexander the Great: Student of Aristotle, Descendant of Heroes?

Not that type of book.

Have you listened to any of Larry G. Jones’s other performances before? How does this one compare?

A Brief Overview of the Life and Times...

…. of Alexander the Great This is an informative, bare-bones look at the high and low points of Alexander the Great. I found the substance of the book captivating and the one hour (plus) flew by. Larry G Jones' performance kept my attention and his soothing yet dynamic voice made the subject matter even more interesting. This book and others by in60Learning are the way to introduce or review a subject/topic before diving into a full-length book. I was given a copy of this work in exchange for my opinion/review. I hope you found it helpful and will leave a vote below – by selecting yes or helpful. Thanks!

In60Learning tackles Alexander The Great’s life this time around. You’ll learn about how he nearly conquered all of the known world with a relatively small army, you’ll learn about his love for his horse, and about Alexander’s legacy.

Jones is a good narrator. Clear, concise, without sounding mechanical.

**I was provided with a promotional copy, and have voluntarily left a fair and honest review**

Alexander the Great... a short bio

I found this book to be quite informative and a decent listen. There were facts about Alexander the Great that I don’t think I had ever heard before. A great way the brush up on a notable historical figure.

Decent portrayal of the subject as an intro

Being only a little bit over an hour long, it would be impossible to give anything except for a basic overview of the historical figures mentioned in the title of this book The work accomplishes that and presents it in a primer fashion which allows for an interest to be piqued if the listener should chose to seek a more in depth study.

The reason for my middle-of-the-road rating is that, due to the narrators style, I found the listen to be a challenge. Not only did Larry Jones voice take some getting used to (which comes down to listener preference), but I found his reading to be rather choppy. There was simply no flow to the reading, almost as if he were reading it for the very first time and had no idea what to expect next. Because of that issue, I'm not sure I would recommend this listen to anyone other than someone really interested in starting out a study on Alexander the Great.

A review copy of this audiobook was provided by the author, narrator, or publisher at no cost in return for this unbiased review. If you found this review helpful, please take a moment to click yes below.

I enjoyed the story of Alexander the Great. The amount of information provided in such a short period is staggering. Very well presented and told in a fluid pace.

The narrator did an excellent job of presenting the story. Too often, the person relaying these facts is very dry, that is not the case here. He was very exuberant about the facts and kept you interested

I requested a free review copy of this audiobook and I am leaving a voluntary and honest review.

good summary of the life of alexander

explains backstory,context and the many great influences on Alexander's life. Its nice because it's brief, but it will inspire you to learn more about the multi faceted and complex stories.

I enjoyed this slightly-more-than-an-hour biography of Alexander the Great. It was pleasant to listen to and easy to understand. This audiobook gave me the important details and events of Alexander's life, combining routine historical facts with interesting anecdotes. This audiobook Left me with a solid understanding of who Alexander was and what he accomplished. I was surprised to learn how strong yet compassionate Alexander was, especially given the era in which he lived. This combination of qualities (strength and compassion) seems to exist in all great leaders, past and present (pun intended).

The narrator was clear and easy to follow, but at times, a bit theatrical. At first, this took me by surprise; however, once I got used to it, it was fine.

I was provided this audiobook at no charge by the author, publisher and/or narrator in exchange for an unbiased review.

To try cover any major historical person in an hour is difficult, especially someone like Alexander the Great. But in60learning does an admirable job at this.

Starting with his parents and moving through his life, the book gives brief details of all the major events in his life, talks about this personality and looks (as provided by other contemporaries). It hits all the major points and gives you a good understanding of who he was and what he achieved. It doesn't go into much detail on his legacy, but that's not surprising considering the limited length.

in60learning put out ebooks and audiobooks to cover a topic in roughly 60 minutes. This audiobook comes in slightly above that - 77 minutes - but close enough. A great way to learn something in brief, before deciding if you want to make a deeper dive into other more comprehensive books

The narration by Larry G. Jones is okay. He is clear and easy to understand, but possibly brings too much energy to the reading. every sentence feels a little too excited and energetic, like everything that is being said is very important.

When reading quotes, or speaking words by people Jones moves out of this energetic voice into a different one. I really liked this as it makes those section easy to differentiate, that they are quotes or speeches, however it also highlights the general narration.

I enjoyed this biography of Alexander the Great. Well worth the listen and time.
It was easy to listen to and follow. Facts mixed with interesting stories reminded me of how my favorite history teacher taught her class.
Highly recommended for history buffs for a quick fix. Solid information for youngsters who are tasked with writing a paper on him or the era.
I will definitely check out others by this publisher.