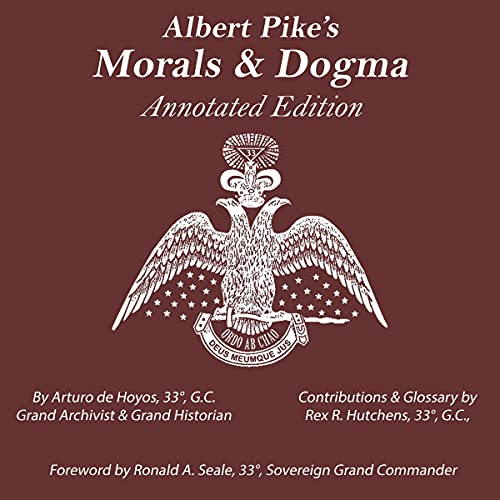 A Masonic classic! The fundamental sourcebook of Scottish Rite philosophy - now available in a new, user-friendly, and scholarly edition!

First published from 1872 to 1969, Morals and Dogma is one of the most insightful works ever prepared for Freemasonry. It is a collection of 32 essays which provide a rationale for the Scottish Rite degrees. It encompasses a study of Freemasonry, wise philosophy, ancient mysteries, mythology, ritual, and religion. It serves the useful purpose of putting Masonic morality and ethics within the context of the general society, and bids man to think large - to cast aside the petty concerns of everyday life and to improve ourselves.

This new edition includes the complete original text, but has been fully updated and improved.

New glossary, with primary and secondary bibliographies, and a new index.

This new edition includes the complete original text, but has been fully updated and improved.

A detailed introduction on the history of Morals and Dogma.

The definitive work of the Scottish Rite!

There are many versions of this book out there but THIS is THE one that every Freemason should own. The performance is excellent and the annotations add an element of context to the work that make it more accessible and understandable. This is a must have.

For me, this audio edition of Morals and Dogma has been essential to successfully completing the Master Craftsman educational course of the Scottish Rite, Southern Jurisdiction. The information and explanations provided in the annotated footnotes helped with my understanding of some the more challenging chapters. Also, being able to bookmark and make notes along the way is a huge plus. With over 46 hours of content, this audiobook has been my constant companion during my 1-1/2 hour commute to work.