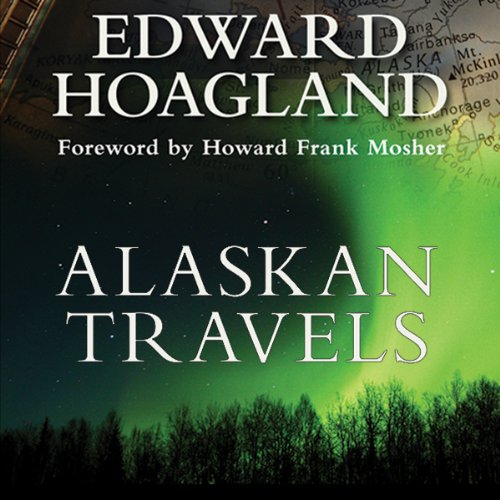 One of America's great essayists, Edward Hoagland recounts his travels to Alaska, where he falls in love with a nurse named Linda. Alaskan Travels is an engrossing mixture of memoir, cultural studies, and travel writing, and Hoagland describes the lives of oilmen, millionaires, and Eskimos with the same intensity he uses to capture the brutal landscape.

David Rapkin delivers Hoagland's narrative with a clean, crisp style, helping to augment the tales of these varied Alaskan people. Like all great travel writing, Alaskan Travels places the listener in its fascinating locale and may inspire a journey to this wild, wonderful land.

Thirty years ago, celebrated American writer Edward Hoagland, in his early fifties and already with a dozen acclaimed books under his belt, had a choice: a midlife crisis or a midlife adventure. He chose the adventure. Pencil and notebook at the ready, Hoagland set out to explore and write about one of the last truly wild territories remaining on the face of the earth: Alaska.

From the Arctic Ocean to the Kenai Peninsula, the backstreet bars of Anchorage to the Yukon River, Hoagland traveled the “real” Alaska from top to bottom. Here he documents not only the flora and fauna of America’s last frontier, but also the extraordinary people living on the fringe. On his journey he chronicles the lives of an astonishing and unforgettable array of prospectors, trappers, millionaire freebooters, drifters, oilmen, Eskimos, Indians, and a remarkably kind and capable frontier nurse named Linda.

In his foreword, novelist Howard Frank Mosher describes Edward Hoagland’s memoir as “the best book ever written about America’s last best place.” In the tradition of Twain’s Life on the Mississippi and Jonathan Rabin’s Old Glory, with a beautiful love story at its heart, this is an American masterpiece from a writer hailed by the Washington Post as “the Thoreau of our times.”

What listeners say about Alaskan Travels

Uncomfortable on many places

I would have preferred not to leave the book with a compromised faith in Hoagland, the man. This is a matter of sensitivity though, it likely won’t generally offend others. There was a hint in another book when he talks as a senior about enjoying sleeping between the sheets that a sixteen year old girl had recently been in. If that was unpalatable, there will be moments here in this collection when you hear things, his ways of seeing women and openly expressing honesty with his sexual preoccupations, that will similarly move you away from Hoagland the writer and toward Hoagland the oftentimes lecherous man. Again this is personal, but it’s not the first time I’ve heard this take on it.

Could you see Alaskan Travels being made into a movie or a TV series? Who should the stars be?

Oh sure, if someone really wanted to I guess. There is much in it and Hoaglands skill is often to be found in how well he brings the reader along with him through the descriptive. So, you can almost already see the movie.

More words for no reason is not always better. Some just telling the story is enough.

A new view of Alaska more from the locals!

The author spends two thirds of his time telling about the life of the native people and the why of their ways. The last third is too much about himself!