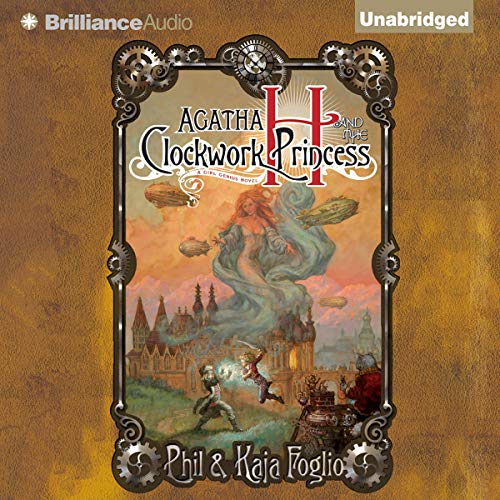 Agatha H. and the Clockwork Princess

In a time when the Industrial Revolution has escalated into all-out warfare, Mad Science rules the world… with mixed success.

With the help of Krosp, Emperor of All Cats, Agatha has escaped from the massive airship known as Castle Wulfenbach. After crashing their escape dirigible, Agatha and Krosp fall in with Master Payne’s Circus of Adventure, a traveling troupe of performers dedicated to staging Heterodyne shows - dramatizations of the exploits of Bill and Barry Heterodyne and their allies - who are unaware of Agatha’s connection to the Heterodyne line.

Pursued by the ruthless Baron Klaus Wulfenbach, his handsome son Gil, and their minions (not to mention Othar Tryggvassen, Gentleman Adventurer), Agatha hides in plain sight among the circus folk, servicing their clanks and proving herself adept in performing the role of Lucrezia Mongfish, nemesis to - and later wife of - Bill Heterodyne. She also begins training under Zeetha, swordmistress and princess of the lost city of Skifander. Together, Agatha, Krosp, and the performers travel across the treacherous Wasteland of war-torn Europa, toward Mechanicsburg, and the ancestral home of the Heterodynes - Castle Heterodyne.

But with many perils standing in her way - including Wulfenbach’s crack troops, mysterious Geisterdamen, savage Jägermonsters, and the fabled Storm King - it’s going to take more than a spark of Mad Science for Agatha to get through.…

From Phil and Kaja Foglio, creators of the multiple WCCA and Hugo Award-winning webcomic Girl Genius, comes Agatha H and the Clockwork Princess, a gaslamp fantasy filled to bursting with Adventure! Romance! And Mad Science!

What listeners say about Agatha H. and the Clockwork Princess

The narrator brings the entire world to life.
Having read the graphic novels and loved them, I am enjoying the books immensely.

I had heard the authors interviewed and knew about the comic, before I tried this novel. I totally loved it so much more than the comic with the performance and the voices. The audio version is fabulous!

Now, I know that the first book in this series wasn't perfect by any means. However, I found it to be an entertaining jaunt. I figured it's sequel would be much the same. Unfortunately, it seems I was completely off base with that prediction. Clockwork Princess pretty much took all of the things in the first book that I liked (The entertaining and/or interesting cast of characters, comedy, a love interesting who doesn't make me want to gouge my ears out, a tolerable main character etc.) and threw it all out the window. Instead we get a cast of carnival folk who are neither entertaining as a group, nor interesting on an individual basis, and a boring love interest who is clearly set up not to be the main lasting one because he's just too... well... boring. And, also, they have nothing in common. (Seriously, what's the point of bothering with a love triangle if you're not going to attempt to make the hypotenuse a feasible choice for either the reader or the character.) This group of characters spent, like, ten hours being dull and not quite interchangeable but still too numerous and unimportant for me to feel invested in, without actually furthering the plot much, while Agatha develops a bad case of Special Snowflake Syndrome.

The plot finally shows up in like the last 6-8 hours hours of the audiobook. However, I've already trudged through 10+ and so I can't bring myself to care at this point. Plus it's as a result of a ridiculous turn of events that would have been fine if this book had retained the silly, fun tone of the first book. However, it did not, and so just came off as stupid. Also, more Agatha is special and another idiot in love with her barf. The very last clash is probably the only truly entertaining section of the book, but it comes to little too late and is not really worth it.

On a positive note, the narrator was lovely, though I feel she did better in the first book. It was obvious that she was running out of distinct voices for the vast, mostly useless cast of this one. The jaegermonsters were, as always, entertaining, and the only new folks I actually liked. Krosp was still great, though not actually integral to the plot, unfortunately. And the footnotes were a nice touch that often held stuff more interesting then the actual story.

All in all, not one I'll ever touch again. Should have been 6 hours shorter.

A great listen and full of humor.

What made the experience of listening to Agatha H. and the Clockwork Princess the most enjoyable?

The humor in the story and the narrator's use of different voices.

What was one of the most memorable moments of Agatha H. and the Clockwork Princess?

When you discover what all the little clanks Agatha has made are really doing.

It is hard to have just one.

I sure hope the Authors continue the story, I can't wait to find out what happens next.

Read before seeing the comic

What made the experience of listening to Agatha H. and the Clockwork Princess the most enjoyable?

I enjoyed it more than the comic because I was able to visualize the characters for myself. The comic depiction of the characters was different that the picture I had created in my mind.

I enjoyed Claus, because he is strong, but confused. He is controlling, controlled, and completely oblivious and I enjoyed that.

Steampunk at it's best!

Loved it! Left me wanting the next book now. The Foglio's smashed this one out of the park. The reader was spot on! I am impressed!

It's a good story in a steam punk universe, the characters are entertaining, it's not predictable, and the preformance is pretty good.

I listen to audiobooks to keep me productive while I work and this one served that purpose.

As a fan of Girl Genius in several of its iterations. I have to say that the actress used in this book was the best choice! I loved everything about the "retelling" of the story I enjoy. I plan to revisit this audiobook the way that I reread the books.

The first book had issues, but this second book was much better!

This story picks up where the last book left off. Agatha and Krusp are on the run from Castle Wulfenbach. They encounter a Heterodyne circus, which they join in order to cross the Wildlands relatively safely. They learn about the outside Wildlands and the villages in between. Quite a few adventures before the title character is encountered. From then onward, it gets a bit confusing again, but for different reasons.

I found it a little long in some areas and a little short in others; sometimes there are fragmented story bits, which I hope are setups for future books.

Overall, I could not put the book down. I wanted to know what happened next. Now I am off to find the next in the series because wow! What is going to happen next???

The narrator is so good. The story itself is awesome, the narrator makes it even more so. I highly recommend this series!

if you have read the Girl Genius comics you will love these stories. Even if you have not they are top notch.

I love both the graphic novels and this series, but it seems there is a footnote every other paragraph.

Other than that, it's a great novelisation of the Girl Genius series and I love the narrator.