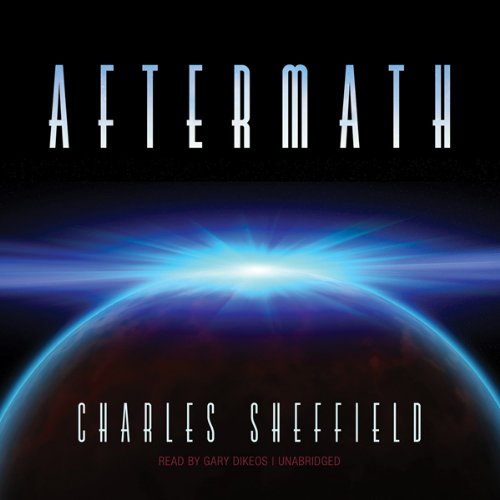 It’s 2026, and catastrophe has struck from an unexpected source. The Alpha Centauri supernova has risen like a second sun, rushing Earth toward its last summer. Floods, fires, starvation, and disease paralyze the planet. In a blue aurora flash of gamma rays, all microchips worldwide are destroyed, leaving an already devastated Earth without communications, transportation, weaponry, or medicine.

The disaster sets three groups of survivors on separate quests. A militant cult seizes the opportunity to free their leader, known as the Eye of God, from the long-term coma to which a court sentenced her. Three cancer patients also search for a man in judicial sleep: the brilliant scientist - and monstrous criminal - who alone can continue the experimental treatment that keeps them alive. From a far greater distance come the survivors of the first manned Mars expedition, struggling homeward to a world that has changed far beyond their darkest fears. And standing at the crossroads is one man, U.S. President Saul Steinmetz, who faces a crucial decision that will affect the fate of his own people - and the world.

"Charles Sheffield is one of the very best hard science fiction writers in the world." (Kim Stanley Robinson, award-winning author of the Mars Trilogy)
"Sheffield clothes the most advanced speculations of modern science in alluring forms of beauty and danger." ( Washington Post Book World)

What listeners say about Aftermath

Has Aftermath turned you off from other books in this genre?

Who would you have cast as narrator instead of Gary Dikeos?

Anyone over the age of seven.

The narrator reads in an excruciatingly slow, halting voice with completely illogical pauses. His dialog is stilted and simpleminded. Peopleceother all spund tnevsame or sound ridiculous. Every time I think I've encountered the worst possible narrator, I find a new low. This is it. Sheffield's book are usually idea-rich, but with slow pacing. A narrator like this turns a potentially interesting book deadly.

How could it have been worse? I very rarely give up on a book, but this reading was so poorly executed that it was painful to listen to.

Give it a read, it's worth the credit

I’ve waited for Aftermath to arrive and had it on my pre-order list. After listing to it completely, I am reasonably pleased. The premise and plot lines hold together well. The novel asserts that a super-nova generated by Alpha Centauri has affected the Earth’s weather and infrastructure. Although I am not an astrophysicist, I know this to be implausible – thus I will give the author his one pass card. The other science fiction is not too much of a departure.

The characters are interesting and Sheffield does a good job getting you involved in their stories. During the development of the plot, he switches among points of view reasonably and with enough detail to keep you engaged.

Gary Dikeos narrates the novel. I did not care for his voices, especially the one he used for the president – Sol. He did have a decent pace and I give him points for trying.

This novel would appeal to any general science fiction interested reader. However, those hard sci-fi aficionados would not find it up to their rigorous standards. I am please to have listened and will probably read the sequel Starfire.

What disappointed you about Aftermath?

I have been so distracted by the really awful performance of the narrator...
He reads way to slow and the voices for caracters are just horrible!

Would you recommend Aftermath to your friends? Why or why not?

I would recommend that my friends read the book instead of wasting their money/credits on the audiobook.

He reads far to slowly!
The "voices" for the different caracters makes many of them seem mentally handicapped..
Even with the player set at 1.5 speed, the narration is slow..

Dissapointment!
The story is OK, but the narrator just ruins the experience!

Yes to Charles Sheffield no to Gary Dikeos

What other book might you compare Aftermath to and why?

Maybe to One Second After. That is mostly because both are post EMP novels

Who would you have cast as narrator instead of Gary Dikeos?

Whilst I am enjoying the story I find it very difficult to listen to when the narrator does accents. His female voices are awful, his Australian accent is woeful and most of his male characters sound like senile old men.

Get another reader. By and far the worst reader I've ever heard

Could you see Aftermath being made into a movie or a TV series? Who should the stars be?

Clearly the reader buys into racist stereotypes. The Jewish president had a nasal whining voice.

What made the experience of listening to Aftermath the most enjoyable?

almost stopped listening to the book. the reader sounds kinda robotic and droning.. after a while when things started happening and more characters were introduced. the reading got better and didnt sound as bad and went away after a while.

The premise is super exciting -- Alpha Centauri goes super nova and creates an EMP, blowing up and leaving the earth in darkness as a result. The result? Dull, dull, dull. Not only is the storyline agonizing slow with very little action, but the narrator made it even worse. He reads the narration just fine, but whenever he gets to the dialog parts, every character sounds like a weird, disconnected robot (especially the women). And the accents were atrocious. I tried... really, I forced myself to make it past the half-way point, but I realized I'm just wasting precious time that I could be listening to something else. It's a shame. It's such an awesome premise, which is why I'm giving the story two stars instead of one. Maybe someone else will like it better.

I've been waiting for Aftermath to be released for a few months. The discription had me hooked. I have tried listening to this book all afternoon...fact is the story is slow and the narriation is flat. What a waste.

This story had me right from the beginning. The characters are believable and one worries about what will happen next to them. I hope there is a second book as this one ends somewhat in the middle. I want more, I tell you!

Couldnt get on with the Narrator

Good story, I enjoyed it as far as I could and may go back and finish, but I have given up for the moment as the Narrator is grating a little. The female falsetto voice and the just too gravelly male voices are starting to detract too much from what's actually going on for me. Australian accent best not mentioned! I think I will finish this but the narration is putting off listening to this is one go, I need a break then come back to it. Sorry to join the band wagon but Narrator really is not the best :/