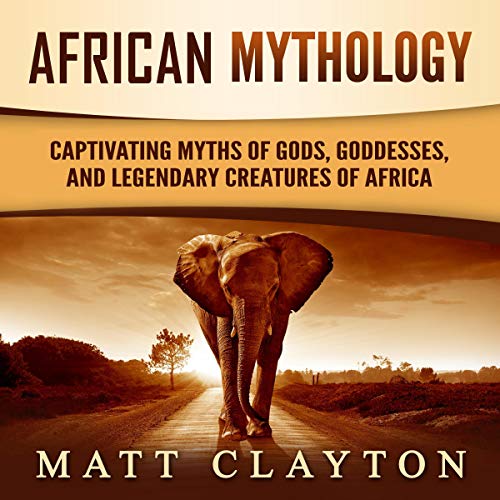 If you're looking for a captivating collection of African myths, then pay attention...

The continent of Africa is home to 54 countries that together harbor over 3,000 cultures, each with their own ways of life and each with their own stories. Some of these stories have their origins in the folk beliefs of people native to their particular region, while others were imported from or influenced by cultures from elsewhere who settled in Africa.

A great number of African folktales have been transmitted orally from person to person down through the ages, but since the 19th century, many stories have been written down and transmitted to audiences beyond the boundaries of the cultures that created them. One important - and tragic - conduit for the transmission of these stories beyond African shores was the European slave trade. Captured Africans who were brought to the Americas and the Caribbean fought to keep alive what they could of their home cultures, and this included their folktale traditions.

African folktales come in many different types. Some are myths explaining the origins of things, while others are tales of heroes with supernatural abilities. Animal stories are many and varied, and they usually involve some kind of trickster who uses his wiles to get out of sticky situations and sometimes into them. There are also cautionary tales explaining why it is important to behave well and treat others with respect, while other stories have a style and shape similar to that of a fairy tale.

So if you want a captivating collection of African myths, buy this audiobook today!

What listeners say about African Mythology

The book itself is wonderful.

For anyone interested in African Mythology, follow this audible!!!! I've seen many books on mythology and this is my preferred. Beautiful work, I wish I would have bought it sooner!

Should be read in schools

I got this for my best friend to go along with his class studies. The author made this audible more information about African Mythology. I’m so glad I purchased it.

Excellent presentation of the African Myths

This publication will even point out other scholars' different take on a story in the audible. Excellent! A true and the best version of Myths of Gods, Goddesses, and Legendary Creatures of Africa.

This is a set of varying length narratives, infrequently they are quotations, from various areas of Africa. The topics and coloration vary from mysterious to authenticity, and adventure to a moral tale.

It focuses on the memories, personalities, protagonists, history of Africa. The spectacles are ideal. Get this title.

This hereabouts is a detailed introduction of the African myths. I warrant, it has genuine narratives from different regions of Africa to showcase a chapter's content.

I've loved Matt Clayton's book since I was a boy, and am very exhilarated I bought this special edition for my digital library.

Beautiful Edition of a Classic

I love the tales in this audible!! I have a small obsession with all kinds of myths and legends and this title performs. if you're like me and you want great stuff about the gods, I would highly recommend!!

This is great work! I love Myths of Gods, Goddesses, and Legendary Creatures of Africa. It's very well described and easy enough to understand.

Exactly what I was looking for!

The audible gives you a brief but clear view of African Mythology, all the fascinating facts, and stories!

Well explained in a simple language

Awesome content and I always been interested in African mythology...a lot of tales were different than what I grew up with but they're still exciting.. need to be more documentaries.

This volume was interesting and easy to understand as far as history books go. My eyes were stuck to it for a few days.

Entertaining content on mythology and some of my favorite African Mythology. I have loved the story since I was a kid so it was nice to relive those stories.

Excellent! A true and the best version

Excellent presentation of the African Myths. This edition will even point out other scholars' different take on a story in the work. Wonderful! A true and the most suitable version

Should be there in schools

I got this for my daughter to go along with his other books. They made him want more information about mythology. I’m so glad I bought it.

If your into Greek Mythology your gonna love this

For anyone interested in mythology, follow this work!!!! I've seen many books on mythology and this is my favorite. Excellent writing, I wish I would have bought it sooner!

My kid really loves mythology and appreciated this panorama and the extent of myths covered. Very interesting examples.