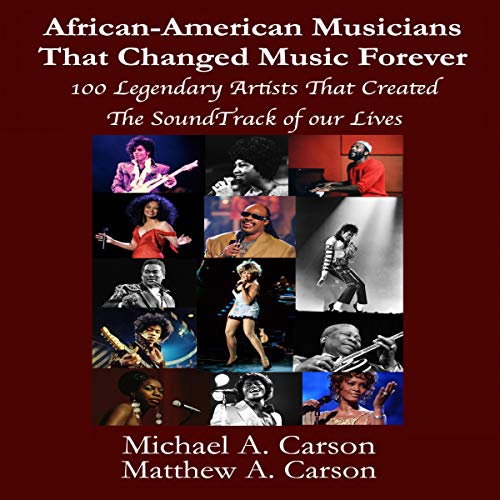 By: Michael A. Carson, Matthew A. Carson
Narrated by: Derrick E. Hardin

Throughout history, African American musicians and artist have made a profound impact in music, they have given sound and voice through a wide variety of musical genres. Universally they have expressed emotions that is shared through faith, passion, joy, comfort, and injustice through songs that speaks directly to the heart and spirit.

Many of these performers have the power to influence, inspire, and affect social change through their musical talent. Their personal stories and experiences have transcended time and encouraged several generations to continue singing, dancing, preaching, and perform with musical instruments. Over the past two centuries, these experiences have become part of a cultural identity.

The incredible men and woman featured in this book are responsible for creating some of the most iconic songs ever recorded in the history of music. Their trailblazing sounds have been synonymous in the inception of several musical genres such as gospel, blues, jazz, soul, rock and roll, R&B, disco, and hip-hop, to name a few. Their timeless musical treasures continue to enrich and endure our culture, history, spirit, and soul.

While recognizing the impact African American musicians have made worldwide, through inspiring millions to sing, dance, express their faith, and march for justice, the federal government officially declared the month of June as “African-American Music Appreciation Month”, which was originally established in June, 1979.

In an effort to honor the countless musicians, singers and composers who have played an integral role in crafting America’s soundtrack as well as contribute to every musical genre ever conceived, each year during the month of June, the country recognizes and highlights the contributions African American artists have made throughout history and the impact their music has made in our society and the world.

What listeners say about African-American Musicians That Changed Music Forever