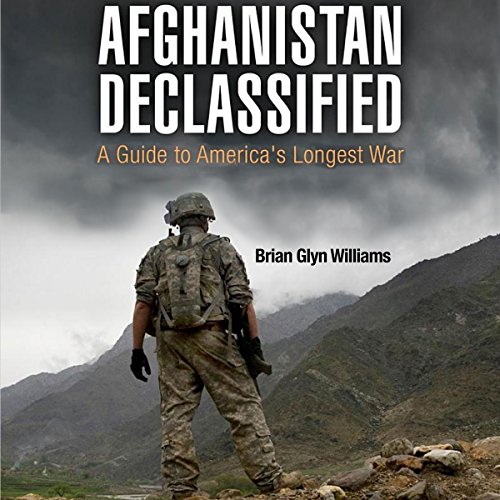 Nearly 100,000 US soldiers were deployed to Afghanistan at the height of the campaign, fighting the longest war in the nation's history. But what do Americans know about the land where this conflict is taking place? Many have come to have a grasp of the people, history, and geography of Iraq, but Afghanistan remains a mystery.

Originally published by the US Army to provide an overview of the country's terrain, ethnic groups, and history for American troops and now updated and expanded for the general public, Afghanistan Declassified fills in these gaps. Historian Brian Glyn Williams, who has traveled to Afghanistan frequently over the past decade, provides essential background to the war, tracing the rise, fall, and reemergence of the Taliban. Special sections deal with topics such as the CIA's Predator drone campaign in the Pakistani tribal zones, the spread of suicide bombing from Iraq to the Afghan theater of operations, and comparisons between the Soviet and US experiences in Afghanistan.

To Williams, a historian of Central Asia, Afghanistan is not merely a theater in the war on terror. It is a primeval, exciting, and beautiful land; not only a place of danger and turmoil but also one of hospitable villagers and stunning landscapes, of great cultural diversity and richness. Williams brings the country to life through his own travel experiences - from living with Northern Alliance Uzbek warlords to working on a major NATO base.

What listeners say about Afghanistan Declassified

So many errors, misinformation, in times biased to an extend that he is praising the warlords Dostum and Massoud while going against other warlords such as Hekmatyar. I would rather recommend Decent Into Chaos, Taliban, Ghost War, Directorate S, Afghanistan a Military and Cultural History. The author should rewrite the book and make it accurate. Wasted my money.

half of this book is just the geography of Afghanistan. and I mean details description of all the valleys all the rivers all the gorges stuff that has nothing to do with the Afghan war and no relevance at all. will just put you to sleep unless you're planning on a tourism trip to the cities.

the other critical thinking about this book is that pretty much every single name and city is utterly destroyed by the strong American accent of this author. I was struggling to understand half the names of the places and people that I know already.