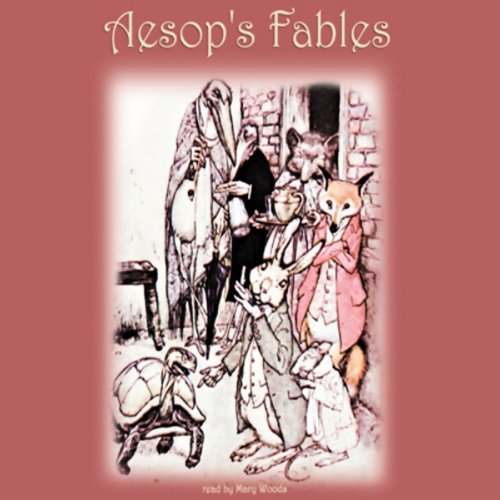 By: Aesop
Narrated by: Mary Woods

It is both amazing and wonderful that so much of the richness of our language and our moral education still owes a huge debt to a Greek slave who was executed over 2,000 years ago. Yet "sour grapes", "crying wolf", "a dog in a manger", "actions speak louder than words", "honesty is the best policy", and literally hundreds of other metaphors, axioms, and ideas that are now woven into the very fabric of Western culture all came from Aesop's Fables.

The earliest extant collections of Aesop's stories were made by various Greek versifiers and Latin translators, to whose compilations were added tales from Oriental and ancient sources to form what we now know as Aesop's Fables. The majority of European fables, including those of La Fontaine, are largely derived from these succinct tales.

An extraordinary storyteller who used cunning foxes, surly dogs, clever mice, fearsome lions, and foolish humans to describe the reality of a harsh world, Aesop created narratives that are appealing, funny, politically astute, and profoundly true. Aesop's truth is often summed up in the pithy "moral of the story".

According to tradition, Aesop was a Phrygian slave who probably lived from 620 to 560 BC. It is inferable from Aristotle's mention of Aesop's acting as a public defender that he was freed from slavery, possibly as a result of his wit. Plutarch stated that the Athenians erected a noble statue of him. Little is known about his life and many conflicting stories exist. It can be stated, however, that he was an extraordinary storyteller who conveyed his remarkable wisdom regarding human nature in appealing tales. Over the centuries, Aesop's Fables have retained their power to reach our intellects and touch our hearts.

What listeners say about Aesop's Fables

Thear tales from the beginning of western civilization tell much about why we are where we are, a d dragging thr rest if the planet along with us!

Nicely read & without any thrills.

I think it was a good choice, to get this audio book.