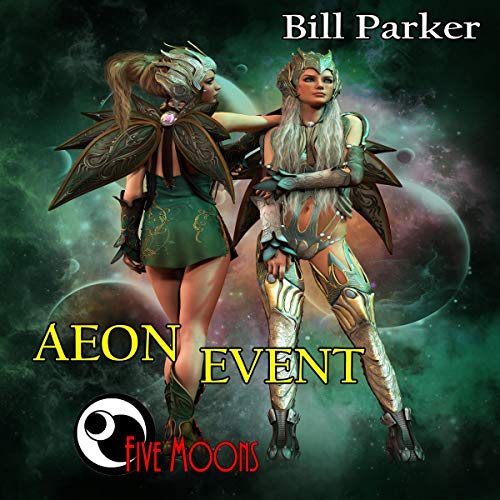 Dragon Eyes began this bold science fiction adventure. Then Sibyls’ Orb dragged you inexorably into the beating heart of this mystical walk on the wild side of science fiction. But now, this twisted tale of mystical intrigue weaves your mind forever into Aeon Event.

I am Chon ko Gonin, Captain of the Green Jinn. They call me the Dragon Warrior for a reason - I am Evil’s worst nightmare. I am Recon, the tip of the spear. Fate sends me where angels fear to tread. I am no damned angel. Then the desperate plea came in from Kianori on a distant world beyond the farthest reaches of the Union frontier. Even worse, she couldn’t tell us where she was, but that was just the beginning of our woes.

My name is Phoebe. With the help of the Council of the Crescent Moon and my time-space orb, we reached across the vastness of space to find Kianori. Even so, we would have failed but for the quantum power of our Dragon Warriors.

Kianori’s people had come under attack by the Jatarians, evil reptilian creatures from the Gates of Hell. Red, green, yellow and blue, these evil reptiles looked like gargoyles from your worst nightmare. Screeching and howling, they killed their way forward. Even worse, they killed the people only to eat them. To the evil Jatarians, humanoid creatures were nothing more than food. There was no reasoning with the Jatarians. They only take prisoners to eat them later. It was my duty to stop them. I swore an oath to protect and defend the people and that is damned well what I will do. I am Recon flesh and Recon bone.

Akila is my name. I am a Dragon Warrior, but not like Chon. I was marked with a silver dragonfly. Even so, I wonder how I ever got dragged into all of this but dragged in I am. Between the quantum portals and the Anoza Mysticism my head is spinning. But science or not, one more time, I was dragged into the whirling vortex of a battle with the worst evil creatures I have ever seen.

Then, in a dream, Fate called me one more time. He sent all of the Dragon Warriors down into the heat of battle with the evil screaming Jatarians to save one little pair of eyes staring out from behind her hide. He may have sent us all, but this time, Fate called me. He sent me to save little Leah. He sent me to pick her up and carry her back to the Green Jinn. From that moment one, I loved her as my own and she loved me. For me, saving Leah changed everything.

What listeners say about Aeon Event