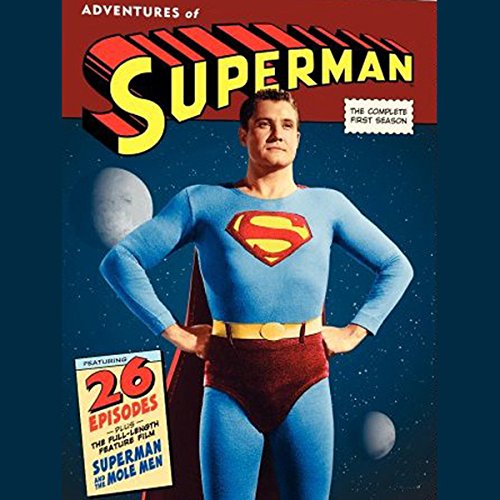 By: Adventures of Superman

It's a bird! It's a plane! It's the premiere episodes of The Adventures of Superman!

Debuting on March 12, 1940, the exciting radio serial was an instant hit. Starring Clayton "Bud" Collyer in the dual roles of Superman and Clark Kent, this initial nine-episode sequence tells the story of the destruction of Krypton and the Man of Steel's arrival on Earth. It features the very first appearances anywhere of Lois Lane, Perry White, and the Daily Planet, and introduces two recurring arch-enemies: the Wolf and the Yellow Mask.

The Adventures of Superman was a radio mainstay until its final episode in March 1951. In all, "Bud" Collyer played his most famous role in more than 2,000 episodes.

"The long-running adventure serial...was one of the hallmarks of the Golden Age of radio....Superman was never able to fly as high on television as he had for an adventure-filled decade in radio's theater of the imagination." (Anthony Tollin, "Superman on Radio")

What listeners say about Adventures of Superman, Vol. 1

The Classic Hero of Imagination

Everyone knows who Superman is. they make movies and cartoons to go with his comics. the best part of this is your imagination is at work. each person individually sees what they want to see as the cast of this great show only gives you basic ideas for what he is doing. we see the speed he can fly. we imagine how superman sees in the dark (me i personally envision night vision goggle mode) and we sore around the world beside our childhood hero

The only down side is right now there is only four volumes, four adventures of the superman story. the show ran almost every day for 11 years, if Audible can get more of this classic show i would love to buy more.

Loved it, but too short!

I listened to these years ago and loved them then too. The sound effects are great and develops a strong picture in the mind while listening. What I like best is older heritage of the US in its halcyon days! Loved it.

The audios are cleaned so there no static.

The only downfall is that it's less than 2 hours. These episodes are free on the internet so I'm boggled as to why you don't get more.

This old radio program was thouroughly enjoyable! It was fun for me to be able to relive a radio drama as they had used to be performed in the days of my parents with my young son. A wonderful blend of time and technology. Thanks for this opprotunity!

Wish they had radio shows like this now days.
At least I have adibule so that i can listen to the jems of yesteryear.

Amazing. i can not recommended this more.

If you love superheroes or fun stories of good vs evil, listen to this now!

old time radio all the way.

old time radio is always the best. and this is one of the best old time radio programs. I just wish that this program had more episodes in it.

I liked it but it is not George Superman Reeves. Give me the 50s tv-show.

Superman but not as you know him!

Everybody knows Superman, whether you've read his comics, watched him movies or TV shows, or just inhaled the enthusiasm from some of his millions of fans. And a lot of aspects are established; weakness to Kryptonite, arch enemy Lex Luthor... but when you listen to a volume of his radio show- which at a time was a huge success- you may well feel a bit disorientated. The character was relatively new, first appearing in Action Comics #1 two years earlier, and so people likely would tune into the next episode, wondering what will happen next. Which is where the programmes feel dated, there may be an air of tension, but knowing Superman as we now know him, there is little real threat. The villains are rather generic criminals and hoodlums and the acting hasn't aged well. Still, if you are interested in DC, radio history, or just want something family friendly and easy to listen to, these are great, it's an interesting artifact in the evolution of the character and there are a surprising amount of episodes, which are quite short, so you can listen at your own pace. They might cause some unintended laughter at some of the expressions of the day, but so might the comics, and it's all good clean fun.

This is from the 1950's radio shows and is great fun. The overly dramatic links and the pun laden script are amusing to modern ears. But they entertain because it is history, this is the show your grandparents listened to when they were kids. Worth a listen.