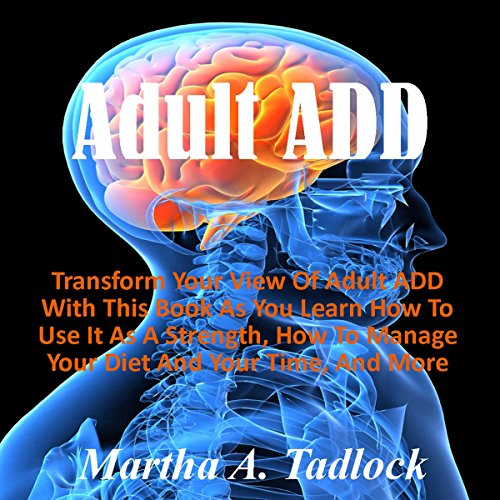 By: Martha A. Tadlock
Narrated by: Natalie Gray

Transform your view of adult ADD with this book as you learn how to use it as a strength, how to manage your diet and your time, and more.

Do you want to learn more about how to overcome common struggles for adults with ADD such as managing time and procrastination? Would you like to change your view of Attention Deficit Disorder from a weakness to utilizing it as a strength? Are you interested in the differences between childhood ADD and Adult ADD? Then this book is for you! Adult ADD starts by examining the common symptoms and struggles of those with ADD. It then gives you simple, applicable strategies to manage your ADD symptoms. You'll learn about why eating right can help you stay focused, how to create positive habits that you keep you organized, and why managing your time is even more crucial when you have ADD. Not only that, this book will help you uncover the strengths that naturally come with those who have ADD, like creativity, energy, and an abundance of new ideas to name a few. As you tap into your strengths, you can utilize them to create success in your life, and change your view of ADD as a weakness into a strength.

Take control of your ADD with the information included in this book! Here is a list of the chapter titles:

Learn more about Adult ADD with this practical, hands-on guide to help you manage and capitalize on ADD.

What listeners say about Adult ADD

Re-live all your old parent/teacher conferences!

What would have made Adult ADD better?

I want to admit, up front, that this review is written from a very personal point of view. It might have just triggered something in me. I don't know. But I feel it's only fair for someone with the trait to hop in and give their honest reaction.

Adults with AD/HD have been told their whole lives to "try harder" while, in reality, we're trying as hard as we can. Lack of clarity and proper guidance - showing us the details that we can't see - is what has been part of so many misunderstandings. This book uses so many generalizations ("try replacing bad habits with good ones"...ok, HOW?) that much of it comes off as Tadlock telling us those two words which are like a knife in the soul of an ADDer: "try harder."

What was most disappointing about Martha A. Tadlock’s story?

The book is written from the "disorder" model, often as though the person listening to/reading it is too dumb or too broken to understand what is going on and that there is some unseen adult in the room that the book is actually addressing. Yes, the book is about a condition that I have, but I always felt that my humanity was not addressed. In the eyes of this book's author, I'm just a problem. A manifestation of a disorder. It was like I was back in 5th grade and the teacher was telling me information which was actually intended for my parents' ears - just to make me feel like I was included.

It says that it talks about the strengths of AD/HD (and there are many), but halfway through it I haven't found a single reason for anyone to feel good or hopeful about having this trait. It's a trait, Martha. The message seems to be something along the lines of: well, you're screwed, but here are some horrifying drugs and expensive treatments you'll have to take in order to be viewed as anything close to a normal, functioning adult - which you'll never really be anyways.

If I had found this book early into my treatment for this TRAIT I would have tossed my ritalin in the toilet and gone back to self medicating because there is only the most marginally positive, condescending silver lining which doesn't even present itself until the majority of the material is done telling you how broken you are. But it's not your fault, so I guess that is cause for hope?

When someone has performed their function in the most basic, C-level way I've found that it's fun to tell them "job" as a form of non-praise, non-critique. They did, in fact, do their job. Not well, but not poorly. If I were to be directing this recording session I would look the narrator squarely in the eye and tell her, "job" with the utmost sincerity.

What character would you cut from Adult ADD?

This question doesn't make any sense. Why would you put this question on this book, Audible?

Any information found in this book can be easily found by scanning the first three search results you get when you search for "adult ADD." If you're totally new to the AD/HD game, this might have some use but the tone is also so atrocious that I'd worry that anyone using this as their first point of educational contact would just want to give up on any possible future plans, goals, or happiness. I suppose it's ok for people who don't have the trait, but again this would probably cause them to look down on those who do.

It's not overtly negative, mind you. It's just very antiquated in its outlook and that is really apparent in its tone. I didn't think to look, but I imagine that this book was written some time in the 90's when research on the (may) positive traits of ADHD was minimal. Someone without the trait might read this and think that it's all very appropriate and not condescending at all but, to me, it just felt like so many discussions I've had with people who had an intellectual, brochure-level understanding of what I was going through yet still thought that it was totally appropriate to tell me that I just need to pay attention more or to "try harder" when I was already using every ounce of effort I had.

Repeats "Adult ADD" so often that it sounds mechanical. Reminds of having to do a book report or essay with a specific number of words and you get repetitive to fill up space.

What did you love best about Adult ADD?

.. it's a very basic overview... but it leaves you so bored and unconnected that it doesn't do any good.

I just started 'Delivered from Distraction' on audible and it's just what I had been looking for: a comprehensive science based overview of my condition with a compelling narrative. Don't buy this. Get that instead.

Who would you have cast as narrator instead of Natalie Gray?

she was fine. the book was boring. she didn't have much to work with.

a 20 minute of boring documentary you'd see in a middle school science class doesn't get a tag line.

I loved this book for a couple primary reasons.
First, the dialogue is one that can be followed without a medical background or any pre-exiting knowledge of ADD.
Second, the chapters are short and clearly defined, making them easy to consume and digest.
I'd highly recommend this book as an intro for anyone seeking to learn more about adult ADD.

The book only talks about the problems of ADD and its solutions on the surface. I haven't learned much from this book.

This is a good book for someone who is looking for a general overview of Adult ADHD. Do not expect an in depth description and analysis in a book that is read in only 45 minutes!

Narration was great. Content was a little bland. I know I struggle with ADD but most of the suggestions like "If you loose things a lot, try making a place to put them regularly so when you need them, you know where to find them." are a little on the "no s**t Sherlock" side. I will try the diet tips as they made sense. Brainwave entrainment was mentioned but never expanded on...or I zoned out :-) I will listen again.

This book started out pretty good. It gave some of the answers I was looking for. It offered good tips but most of them I've tried already. The best thing about this book was the dietary information and how food impacts ADD. I am mostly disappointed with final chapter. The author attempts to describe ways that ADD can be beneficial, however, I could only relate to the sense of creativity but not the others. I kept thinking to myself "well, that's definitely not me!" It was short and sweet and to the point. Just what us ADDs need!

Some useful stuff, eg ADDD have trouble getting started on tasks. Short book, would have liked more in-depth ideas on getting organised etc. Moderately helpful.