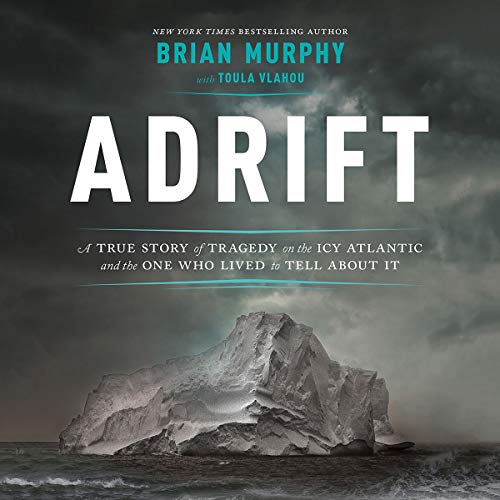 A True Story of Tragedy on the Icy Atlantic and the One Who Lived to Tell About It
By: Brian Murphy, Toula Vlahou
Narrated by: Dan Warren
Length: 9 hrs and 22 mins
Categories: History, World

A story of tragedy at sea, where every desperate act meant life or death.

The small ship making the Liverpool-to-New York trip in the early months of 1856 carried mail, crates of dry goods, and more than 100 passengers, mostly Irish emigrants. Suddenly, an iceberg tore the ship asunder, and five lifeboats were lowered. As four lifeboats drifted into the fog and icy water, never to be heard from again, the last boat wrenched away from the sinking ship with a few blankets, some water and biscuits, and 13 souls. Only one would survive. This is his story.

As they started their nine days adrift more than 400 miles off Newfoundland, the castaways - an Irish couple and their two boys, an English woman and her daughter, newlyweds from Ireland, and several crewmen, including Thomas W. Nye from Fairhaven, Massachusetts - began fighting over food and water. One by one, though, day by day, they died. Some from exposure, others from madness and panic. In the end, only Nye and the ship's log survived.

"Ice is a killer. It kills ships and it kills the men and women on them. Brian Murphy reminds us that for every famous ship that goes down - think Titanic - countless thousands of others have been lost at sea, nameless, forgotten. In Adrift he brings back to life the story of the John Rutledge, and of the crusty Yankee sailors and seasick Irish immigrants who were aboard, and who died when the three-master foundered in the lonely, iceberg-studded North Atlantic - all but one man, that is, Thomas Nye, who kept his wits about him in a frigid open lifeboat and, half-frozen, clung to life. Murphy writes with such authority, you can feel the cold creeping into your bones." (Will Englund, Pulitzer, Polk, and Overseas Press Club Award-winning journalist)

"It's obvious tremendous research went into Adrift, and maritime history buffs will appreciate not only the saga of the Rutledge but also other ships in peril during the 1800s, when crossing the Atlantic in winter was literally a life-and-death gamble." (Michael J. Tougias, coauthor of So Close to Home, The Finest Hours, and Above & Beyond)

"The dramatic story of Thomas W. Nye, the sole survivor of the John Rutledge's tragic encounter with an iceberg in 1856, is beautifully rendered, gripping, and emotionally engaging from beginning to end. Murphy and Vlahou perform a literary magic trick of sorts, transporting readers into another era and enabling them to see and feel what it was like to travel across the ice-choked north Atlantic in the depths of winter, and confront the ultimate nightmare scenario - a sinking ship in the middle of the ocean with no help in sight. Adrift is a chilling and searingly memorable tale of unimaginable suffering and one man's bittersweet triumph over the odds." (Eric Jay Dolin, author of Black Flags, Blue Waters and Leviathan)