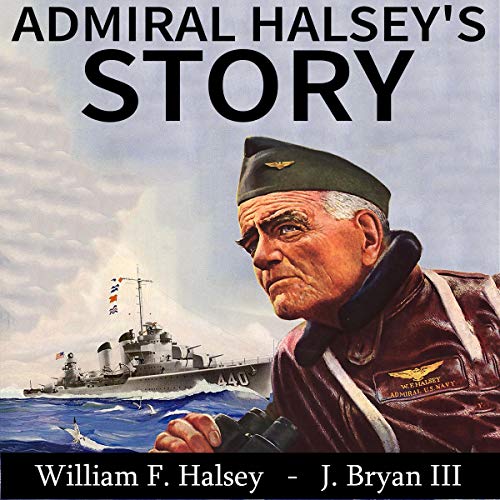 Admiral William F. “Bull” Halsey earned a legendary reputation for daring and boldness as commander of the U.S. Third Fleet. Admiral Halsey’s Story is this admiral’s record of his actions through the course of his remarkable career in the US Navy.

The account begins with a brief overview of his years in school and early years with the navy, where he fought in the First World War and served in Mexico and Greece, as he rose through the ranks to become vice admiral just before the outbreak of the Second World War.

Halsey’s life was dramatically altered with the Japanese attack on Pearl Harbor, as through the next four years, he rose from relative obscurity to become one of the most famous allied naval figures in the war.

The events of Halsey’s life through World War Two are split into three sections in the book and are covered in wonderful detail:

During the war, Halsey had continually acted with bravery and speed and all of his most famous actions are covered through the book, such as how he directed the campaigns in the Solomons and led the attacks on the Carolines and New Britain.

William F. Halsey was an American admiral in the United States Navy during World War II. In 1943, he was made commander of the Third Fleet, the post he held through the rest of the war. He was promoted to fleet admiral in December 1945 and retired from active service in March 1947.

Admiral Halsey's Story was first published in 1947, and Halsey passed away in 1959. The book was written with Lieutenant Commander J. Bryan III, USNR, who during the war had served a lieutenant commander assigned to naval air combat intelligence in the Pacific. In civilian life, he was a journalist and writer who was born into the influential Bryan family of newspaper publishers and industrialists. He passed away in 1993.

“The book is pure Halsey - the personal yarn of a seagoing, fighting admiral who was forthright, honest, often brilliant, sometimes rash, but who possessed above all else, a natural modesty that enhanced his uncommon valor.” (Naval War College Review)

“To learn what went on behind the wartime newspaper reports, her is an incomparable document. Admiral Halsey has written simply and modestly a book that will further enhance the Halsey legend.” (The Saturday Review)

“He knew far better than armchair historians do that the best defense is a good offense. That is the legacy of Bull Halsey.” (Warfare History Network)

Get the Kindle or buy the paperback. 4.5 star review average.

Narrator reads this like a 5 second news report on speed. His voice is rushed. He stumbled over words and possibly doesn't even breathe. It's like listening to a raving madman. You're never sure what was said. It is stressful to listen to.

This book is good written well but the reader is horrible. Mis-pronounces words hesitates as he reads, lots of um's . Just sounds amateurish.

The narration is atrocious

The performance is full of mispronunciations and stumbles. The audio sounds like it was recorded in a closet. I’ve read the book and it is great, but the narration is so poor as to be distracting and I had to stop listening. I hope a professional narrator records this book and I will be first in line to buy the new audiobook.

who did you get to read this book a 1st grader?

I really wanted to know admiral Haesy story but I could had my 10 year old grand daughter do a better job. i would suggest having this reader scrapped and redone. at least find someone who can pronounce names & places correctly

Admiral Halsey's story is an important one, too bad it is totally ruined by the worst narration I've ever heard on any Audible book. The narrator acts like he never saw the content before, stumbled continually and mispronounced more words than he got right.
Too bad such a wonderful story was ruined!

Great Biography Read by an Amateur

Like him or hate him, William Halsey was a great man. His biography deserves to be read with a bit of gravitas...and not some unprepared college C- student. At the very least the child should have learned how to pronounce nautical terms, parts of a vessel,
and the names of foreign places where good men and women died. In stead we get an “almost good enough” attempt by an amateur, inept, archetypical millennial.

I really liked the book but the person doing the audio struggled to read it.

Don't get this audio book

Great Naval hero, terrible audio performance. Could get through to even Chapter 4. Wish I had looked at the other reviews before I got it.

what a fantastic story of an American Hero. problem was it was a struggle to listen to The Narrative was so bad.

I normally don’t criticize a narrator of a book. They are good people trying to do a good job of reading a good book. This narrator did such a poor job I found it impossible to listen through a book of great interest to me twice. Mispronunciations, stumbles, hesitations...too numerous to name. I’m sure the narrator didn’t intend to hash up his performance, but I respectfully recommend he read through the book & carefully research the pronunciation of words he clearly did not recognize before recording his narration. Better luck next time. This is one book I will be reading with great interest to see instead of hear the story of a great but very controversial World War II American military leader.

The narration is HORRIBLE, don't buy it. Unless they have it re-read by a professional reader.