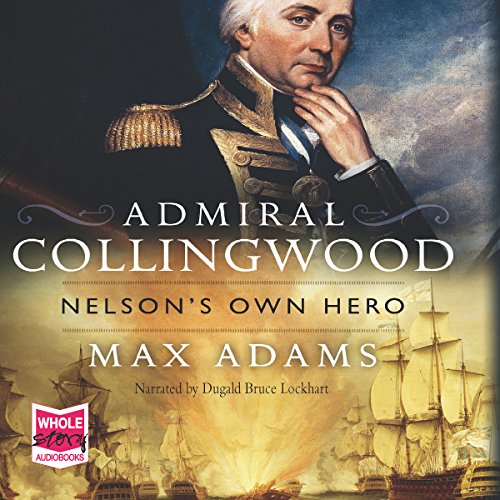 Admiral Lord Collingwood, the eldest son of a Newcastle merchant, went to sea in 1761 at the age of 13.

In his nearly fifty years in the Navy Collingwood's service took him to Boston, where he lived and fought during the American War of Independence; to Antigua, where he and Nelson both fell in love with Mary Moutray; to Corsica; Sicily; and Menorca, where he ended his career as the effective viceroy of the Mediterranean.

What listeners say about Admiral Collingwood: Nelson's Own Hero

Illuminating and well written and researched

Narration could be a little more lively, but given the text it was a good job. Makes one wonder how many other unsung heroes of the era are to be explored.

Max Adams combines extensive research with a sympathetic writing style to give a fair and highly readable account of Collingwood's heroic life and career. Beautifully read by Lockhart.

"A well written and narrated condensation of the events endured by a a loyal but largely unrecognised and forgotten officer of the Royal Navy and servant of the country. This book is compiled from a number of letters, ships logs and diaries and such like and couyld have been a very ""dry"" record. It is not, instead it has been written in such a way to keep the reader interested and to a degree involved in the life and exploits of this fine officer. The narrator brings the book to life in the manner in which the story unfolds but without undue emphasis on the intrigue and low points that occur throughout various chapters of subject's life."

Giving reviews a heading is optional but required?

Good overall, but the producer deserves to be flogged around the fleet for allowing the narrator to mispronounce coxswain and bosun!

What a wonderful story! A truly great warrior and seaman! I'm both proud and humbled to come from the same city.