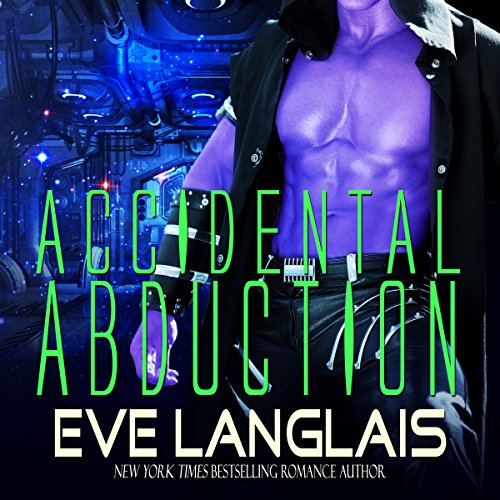 Her boyfriend's attempted murder leaves Megan floundering in the ocean. Sinking without hope, the bright light she sees in the night sky isn't her doorway to heaven, but rather the beginning of her accidental abduction by a space pirate. While thankful of his rescue, Megan stays true to form and just can't keep her mouth shut, even when he keeps threatening to kill her - or auction her off to the highest bidder. Even odder, despite her decision to not get involved with her wickedly hot captor, she can't help craving his touch.

Tren retired from his job as a mercenary so he could enjoy life, but he never counted on the boredom of normalcy. The acquisition of rare items has somewhat filled the void, but his accidental abduction of an outspoken Earthling, who doesn't know when to shut up, turns his life upside. Her fiery spirit draws him while at the same time drives him insane. Struggling with his urges, he must decide - throttle her barbarian neck or ravish her delectably lush body?

Despite what his heart tries to tell him, he's determined to sell her to the highest bidder even as he seduces her body. However, despite his best intentions, he discovers he can't let her go. And when a foe from his past thinks to steal her, he'll do anything to get her back.

What listeners say about Accidental Abduction

i have read this book so long ago and i am glad i upgraded to its audio format. i can't get enough of this purple alien mercenaries and our curvy feisty earthlings. its a face paced story and funny to boot. The narrative is excellent for both Holly Chandler and JF Harding tnk u.

Funny and Totaly Worth it!

This one's worth it! I bought this story because it's fairly short, and didn't cost much, but I honestly did not expect it to be that good. Boy, I was wrong! I loved it, and had to give it five stars!

Megan has bad taste in men, even worse, she's having a really bad night! Her current ex-boyfriend leaves her for dead, stranded, and floating in the middle of the ocean. Knowing she will not make it to see the sunrise, she starts to think she has died when all of a sudden she see's a light; however, she starts to float up towards a spaceship along with a bunch of fish from the sea. This light guides them towards what looks like a sealed aquarium, and she knows if she's dumped inside, she will drown for sure. She sluggishly pulls herself out of the lights gravitation pull, just to fall and break her leg. While laying there on the verge of passing out, she looks up to see an alien and croaks "Holy s***. You're like Han Solo on crack" and passes out. Yep, she's having a bad night.

Tren can't believe he accidently abducted an Earthling. "Ah, Fruckxn' crap." What's he suppose to do with it? Should he "off" the Earthling or keep it? Once he determines the Earthlings a she, he decides he'll sale her the first chance he get's, even if there is not a much of a market for Earthlings due to their temperament. They tend to cry, get hysterical, and have issues with being sold.

Megan knows Tren's plans to sell her, but she doesn't hold back and pushes all his buttons. She's sarcastic, annoying, and challenges him every chance she gets. Even though he set on selling her, they can't deny their growing attractions to each other, and decide to take advantage and give into their desires for each other or at least until she is sold. The sex between them is hot, really hot, and they are quickly growing addicted to each other. As they pass each destination, he decides to keep her a little while longer.

Watching their banter, attractions, and relationship grow was sexy and funny. Well worth my time and credit. I definitely recommend this Sci-Fi romance.

The dual narration was a treat, and I really enjoyed both J.F. Harding and Holly Chandler's performance! They brought the story and characters to life.

This is the first book i have read by Eve Langlais. I loved it. It was funny. I look forward to reading more in this series and trying some of her other books. This book was about an alien who came to earth get specimens from the ocean and wound up with an unexpected specimen. Tren has already left Earth when he discovers Megan. He contemplates killing her or selling her at an auction. He tries to intimidate her but it does it work. She is always getting into trouble and talking. He is not used to having people stand up to him. He is always telling her he is going to sell her to an auction. There is sexually tension between the two. Finn does not want to admit he is likes having her around. After going through adventures together they finally begin to care about each other. Will this be enough?

Both narrators were great. They brought the characters.

I love this book. My only regret is that it was not long enough. I wanted more. Can;t wait till the next book.

It was funny and hot! What more can you ask for?
Megan is a hot tempered female that says the first thing that comes to her mind. It gets her in trouble both good and bad.
If you want a hot and funny sci fi read this is it!

I was looking for something different than what I normally read and this cover jumped out at me. So I picked it up and enjoyed the story. I didn’t think too deeply about it and I think that might be why I liked it. Megan’s character pretty much goes with the flow, if I was here I think I would have freaked the F out right from the get go. LOL I mean really! Ha I think what I like most about Alien type romances is how farfetched they are but yet you're still intrigued enough to want to read em. ;) I will probably keep up with the rest of this series because I have a feeling the brother is next and I want to know who his unwilling victim is lmao!! I enjoyed the narration, I think both did a great job. Actually, I really enjoyed J.F. Harding’s voice I might have to see what else he narrates.

heroine is a *itch

i dont like much about the story. male narrator..... great voice. can hear every inhale that happens at the beginning and middle of sentences. nale for male appendage......horrible. personality and behavior of heroine......horrible and overly and irritatingly snarky. i stopped reading.

The human who never gives up

This book was a decent love story between a strong male Alien and a human woman.

When I saw the Audible upgrade on my Kindle for Samsung mobile app, I was surprised to be treated not one, but two narrators!

With Audible, Eve's book came to life, adding an extra dimension to this humourous, sexy scifi romance. Kudos to the choice of narrators. Please, now that you've spoiled your readers, surely book 2 (Jaro's story) will also have an Audible upgrade soon?

Strong female that finds herself in the middle of the ocean from her lover attempt to killer her & take all her money. Large purple alien male accidently fishes her out & wants to sell her to off planets but, falls for her. Conflit & problems occur and "love/lust" conquers all. Cute story with good one liners. Worth a credi or money. YES..

It's a lighthearted story with some good humor in it. The bickering between the two main characters did get a little tiresome but it was still an enjoyable story. I was looking for a palate cleanser after some dark reading (listening) and this fit the bill perfectly.

A fun book, sex and violence, a short read, an excellent narrator, will read more

Narrators were amazing. The story was a bit predicgive but it was fun listening to it.

Was a faced paced, entertaining book. Good narration. Characters were likable and looking forward to reading/listening to the the next book about wren's brother, the scourge.

Not to my taste at all. Feels like the right boxes have been ticked beginning middle and end. Lots of sex scenes and innuendo that will do. Never mind if the quality is bad the author's name on the book will sell this one.