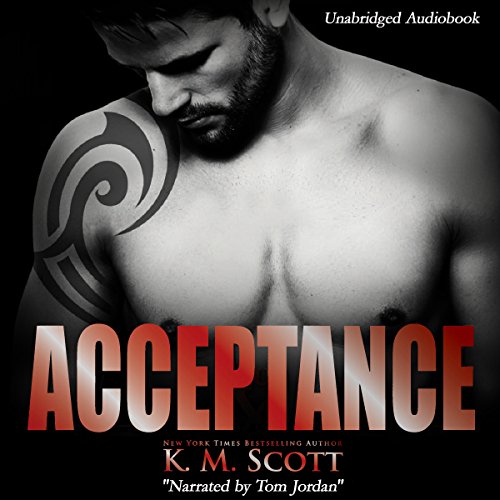 The final book in the Club X series! Life after Club X has been good for the three brothers who used to run Tampa's most exclusive fantasy club. Cassian and Kane run one of the city's up and coming restaurants, CK, and Stefan has his own successful bar in the old Club X building. Two marriages, three kids, and three happy couples make up one big happy family. But there's another son of Cassian March III out there, another illegitimate child who never knew his father. The three brothers don't agree that they should find him, and even more importantly, what they don't know about Sebastian could risk everything they cherish so dearly.

What listeners say about Acceptance

A great story with great narration by Tom Jordan. Five stars for this audio book.

I loved this audio book and stayed in my car or found reasons to drive so I could listen. I loved seeing what was going on with everyone and meeting someone new. WOW at that unexpected turn. The narration was awesome! While I enjoyed the series, I think listening adds a little something extra to it.

This was my first book in the series I listened to which might be why I didn't completely fall in love. As it stands I don't feel like you really learn anything. It felt more forced for a story but it was a good one. The three brothers have an amazing connection but will they add another to the bunch or not? Is he what he seems? I like the ending and Tom did an amazing job breathing life into them all. Would recommend as long as you read or listen to the previous books first.

I have read this series as K,M. Scott is a favorite author! Listening to audio made me feel like I had a whole different experience all together! I enjoyed the story line and these characters. The book is narrated by Tom and I was amazed how he brought these characters to life. Usually I was never a fan of someone else tell the story. He did the book justice. I am loving Audio books more and more as I can listen to my favorite stories while moving around. Acceptance is a sexy and dark book. My heart rate sped up and the temperature just kept on rising. I loved this story when I read it. But audio books brings a new experience for Acceptance that I will never forget!

Although this book was good, I felt I was missing a lot since I hadn’t read the previous stories. I was able to understand the book even though that was the case, but had a problem jumping from person to person through the whole thing. All the men sounded the same so I had a hard time knowing who was who. The circumstance towards the end was heartbreaking and was glad to see that we would be able to find a happy ending.