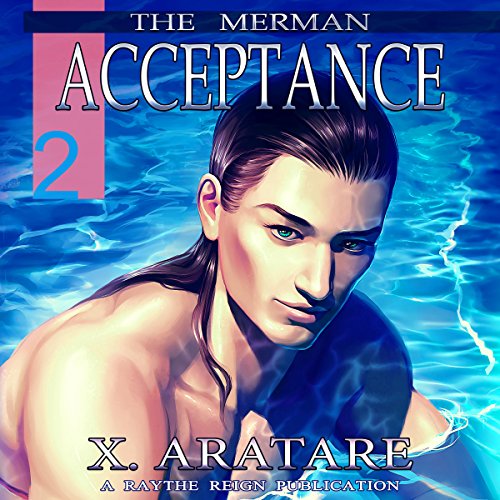 Gabriel Braven is a merman, but he does not believe it.

Gabriel should have drowned twice in his life, but he survived. Casillus Nerion, his beautiful merman savior, tells him the reason for this is simple: Gabriel is a merman. Long ago, a Braven ancestor fell in love and had a child with a powerful merman. This child did not inherit the Mer gifts, but Gabriel has.

Despite seeing inexplicable physical changes to his body when he gets wet and having trouble breathing when there is plenty of air, Gabriel’s head tells him that Mer, like love, do not exist. Ironically, both beliefs are being tested at the same time, as he tries to tell himself that the pounding of his heart when he even thinks of Casillus is imaginary, too.

But whether Gabriel believes or not, Casillus tells him one more devastating fact: the Mer live forever, but unless Gabriel goes into the ocean with him in four days, Gabriel will die.

Can Gabriel accept the truth before it’s too late? Can he open his heart to the merman that saved him? Can he believe Casillus’ words over their mental link that the Mer will never leave Gabriel? Or will he deny himself Casillus and his true nature until his last breath?

Would you listen to Acceptance again? Why?

Yes, I would. It's short enough to listen in one setting, the writing and descriptives are very precise and the dinner scene was greatly narrated.

What was one of the most memorable moments of Acceptance?

See above.. The Bathtub!

It was and I did.

Gabriel Braven is trying to convince himself that the sexy man he first saw in his dreams is just that, a dream, a figment of his overactive imagination. But now he finds himself sitting at dinner with his best friend, his grandmother and granma's new boyfriend, and all the while he's holding a conversation in his mind with one drop dead sexy Merman. After finding his ancestors journal in the attic and following the words to the cave, Gabriel almost drowned again, but Casillus was true to his word when he told Gabriel he would never leave him. Casillus even risks being seen when he rushes to Gabriel's side during a nightmare Gabriel seems to be trapped in. But Gabriel is still suspect to believe he, himself, is a Merman.

I am loving this series of short stories. I believe the four books in the set are each a day in the life of Gabriel Braven, the four days he has from finding out he is Mer to having to give himself over to the ocean forever. There is a lot of content for so few words as you follow Gabe through all the changes in his life, how he is coping and coming to terms with his true nature. There is also a hint of trouble with Granma's new beau, he just doesn't sit right with me. And what is the mysterious darkness that is haunting both Gabe's past and his dreams. I'm very excited to start the next book and see where Aratare takes Gabe and Casillus, they are obviously mates, but I also think it's going to be an uphill battle for them to find happiness in the end.

My first Mer series and my first books from this author, but I am hooked! It is an amazing world Casillus lives in under the water and Aratare spares no expense describing the ocean in vivid details, so much so I can actually see it my mind. And while the character development for Gabriel is a bit immature at times, he's barely a young adult, so it completely fits his personality. Narrated by Chris Patton who really showed his talents during the dinner scene, having to constantly switch his tones and inflections between five different characters in quick succession. Fans of fishy stories and paranormal romance with a slightly sexy edge to it will surely love this series.

Totally enjoying this series. It's sweet how the story is progressing and while the plot is following the pattern I'd expect, I'm enjoying the heck out of it.

I'm sure some of the reason I'm liking this one so hard is due to Chris Patton's soothing and engaging narration.

On to the next one!

Things really heat up in this book!

What was one of the most memorable moments of Acceptance?

I like how he can make each character come alive and sound different.

I liked this book and the series is really good. I already have the next book ready.

Don't purchase to these as individual stories. The author took a passable story and broke it into five parts to sell separately. None of those parts stand well alone

I loved the story and the narrator was simply wonderful! I find myself captivated by his voice. this was done wonderfully !!!

much better than book one

Now it starts to get interesting. I like it a lot with book two. Ok I hooked and will read the whole series!

I like the story. It's easy to listen to before bed. I'm going to get the next book. 😄

Gabriel needs to grow a pair

What did you love best about Acceptance?

The love making and the conversations with the Mer Prince

stop so much whining from Gabriel, it made it hard to stay in the moment, it made sense we knew he was having a hard time with his transion but dang let's move the story along

no sure at all

The 1st book was fabulous and so well done, I am sorry we lost some of the luster here, hoping the 3rd book knocks it out of the park

Book 1: Great story about a boy who hates water because of a tragic accident that kill his parents... but somehow he becomes different from that experience.

Book 2: Great continuation.... now we are finding out what is happening to Gabriel... but the professor.... dude... what is up with him?

Book 3: AWESOME!!! Finally we get some back information about Gabriel, the Mers and the settlement... But that Cliffhanger ending... C'mom.... when is Gabriel going down in the sea and meet his family down there? Seriously...

I hope there is only one more book.. because I am ready to meet the Mers!!!