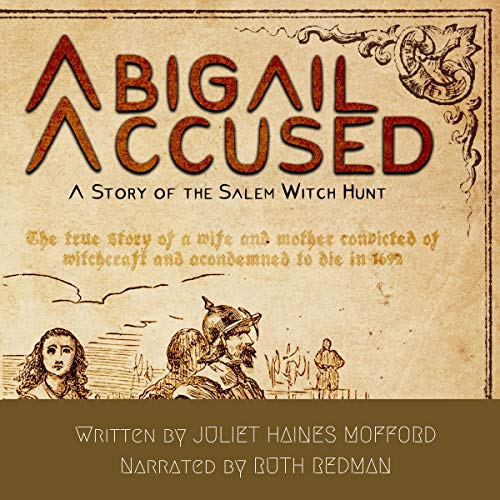 Abigail Accused: A Story of the Salem Witch Hunt

Abigail Accused steps into life in a small New England colony and reveals the callous truth of what has become one of many landmark cases against injustice during the Salem Witch Trials. Abigail Dane Faulkner, daughter of the town’s respected minister, was convicted of witchcraft in 1692 and condemned to die.

Her story is based on eyewitness accounts and 17th-century documents. How did the people of Massachusetts Bay Colony become victims of the fear and religious fanaticism that led to the arrests of nearly 200 citizens and the executions of countless innocents? Why did Abigail's own family - her own daughters - testify against her? Mofford brings to life the dramatic realities of the period and the events of daily life along with events such as courtship, marriage, the sin of fornication, childbirth, poverty, and terrifying attacks by Native Americans upon this frontier community.

Abigail’s abiding love for her husband, Francis Faulkner, sustained him through bouts of what we recognize today as PTSD. Abigail Accused is the historical revelation of how one wife and mother, alongside her minister father, fought bigotry and helped bring an end to the deadly witch hunts. Petitions by father and daughter are landmark documents of free speech and remind us all of the ongoing struggle for human rights.

What listeners say about Abigail Accused: A Story of the Salem Witch Hunt

This does not focus on the trials, as it owns in the preface. It was to be a treatise on the daily life of the accused. The book discusses not just daily life, but mundane, boring details and superfluous explanations of life a the time of the trials. If you are a student of this time in history, you will be disappointed at the lack of interesting content.

I was looking forward to listening to this book. I wasn’t disappointed. One person reading the account which I loved. While listening you were transported to the 1600’s, and got to know Abigail right from the start of her life, to the accounts leading up to the Salem witch-hunt and how it affected her and how she dealt with it including all the other stuff people were faced with at that time.
Great book. I would consider buying this book to put on my bookshelf. Would definitely re-read it.