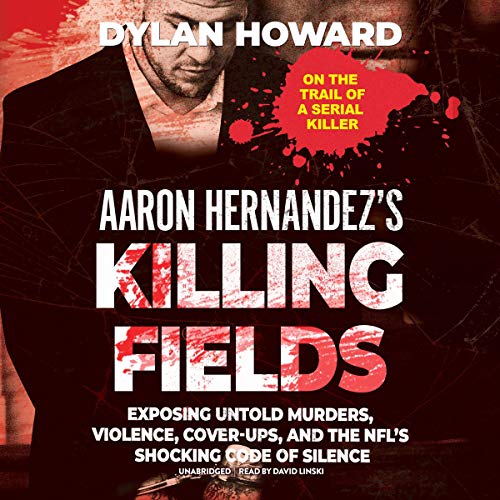 From teenage gang member to $40 million star of the New England Patriots, from All-American college player to drug addict, murderer, dead by suicide in his jail cell at age 27...you think you know the Aaron Hernandez story? You don’t.

For the first time, Aaron Hernandez’s Killing Fields will reveal the real, hitherto unknown motive for the killing of Odin Lloyd - the only crime for which Hernandez was ever convicted and a revelation so shocking it will shake the foundations of the NFL itself. It will also unpick a pattern of violence and brutality stretching back to his time as a teenager at the University of Florida, revealing further shooting victims, evidence of his involvement in the double murder of Daniel de Abreu and Safiro Furtado in 2012.

Featuring new interviews with Hernandez’s cellmates, serving police investigators, prosecutors, psychologists, attorneys - as well as key witnesses including Hernandez’s drug dealer, a male stripper he hired days before the killing of Lloyd - plus extensive testimony from relatives of Hernandez’s victims, Aaron Hernandez’s Killing Fields is the exhaustive, definitive account of the rise and fall of a man undone by his own appetite for violence, gangsterism, power, drugs, and self-destruction.

This is the real Aaron Hernandez story - and perhaps just the beginning of a whole new murder investigation.

This book gave a really solid insight into this guy’s life. The Tv series on Netflix plays him as the victim which he clearly was not. I didn’t like the conjectured and how they assumed how a person would think at the time.

I have been so excited about the release of this book for months! Talk about worth the wait!!! Many of us have followed this story for years and have heard many different aspects of it, this is a deeper look into the life of Aaron Hernandez, a troubled man with lots of secrets. Dylan Howard does an amazing job detailing the events that lead up to Aaron being sentenced to life in prison and the romantic relationship he developed behind bars. Talk about explosive details that I personally have never before heard told in great lengths at the end! I couldn't stop listening and want everyone I know to read this. This book is written SO WELL and absolutely did not disappoint. I was completely drawn in from the very beginning and hope this answers some questions the families of his four victim may have. It's clear that Aaron was a troubled man from a young age and didn't feel he could be honest about his sexuality, which is unfortunate. The lengths he went to hide his secrets left a path of destruction behind and impacted so many lives. I hope if nothing else this book can allow a conversation around sexuality, especially within sports. Creating a safe space where a once taboo topic can finally be openly discussed without judgment. Aaron's life could've been completely different if he didn't feel that he had to hide who he was deep down. It wasn't until he was in prison that he finally felt he could be himself. I wouldn't wish that upon anyone and hope that this book encourages others to feel empowered in who they are without feeling judgement. Such an amazing read. My heart will always go out to the families of the victims and pray that they are able to heal. RIP to everyone involved, including Aaron Hernandez.

Admittedly I'm only on chapter 7 (will update)

So I'm on Chapter 7 and it seems like the same AH story in every other Book and show (Except his brothers book, that had by far the most information). I was very happy when the alleged letter to his prison BF was read in the very beginning of the book but again, other than that seems like the same ol same ol.

I’ve upped my review after finishing

I gave this fairly low reviews because my copy has an audio quality issue. Every once in a while the audio gets loud for a sentence or two then goes back to normal volume and it’s inconvenient - and distracting.

But aside from that and having it take so long to get used to the narrator, this book actually has a lot of info I had never heard before. The only caveat is, is this information factual or just the author’s theories?

I won’t mention any spoilers. I had almost decided to return this book because I wasn’t feeling it or the dry narration, but it has so much info and gets a lot better at the end. I’m changing my review to acknowledge that aside from the audio issue and not knowing how much of a certain theory is true, this is a pretty interesting book. I might contact Audible about the audio issue though.

The performance and recording is on the high school level at best. The recording engineer maybe should look for another job, seriously. I tried hard to concentrate on the text, but the guy who was reading was horrible. On top of this, the volume of the voice jump irregularly from low to high, from quiet to loud. Horrible experience

I strongly not recommend this particular piece.

I'm glad I listen to this book.
I've watched the documentary of it the other night on Netflix and I don't no why but I don't think he killed himself.
but that's my opinion